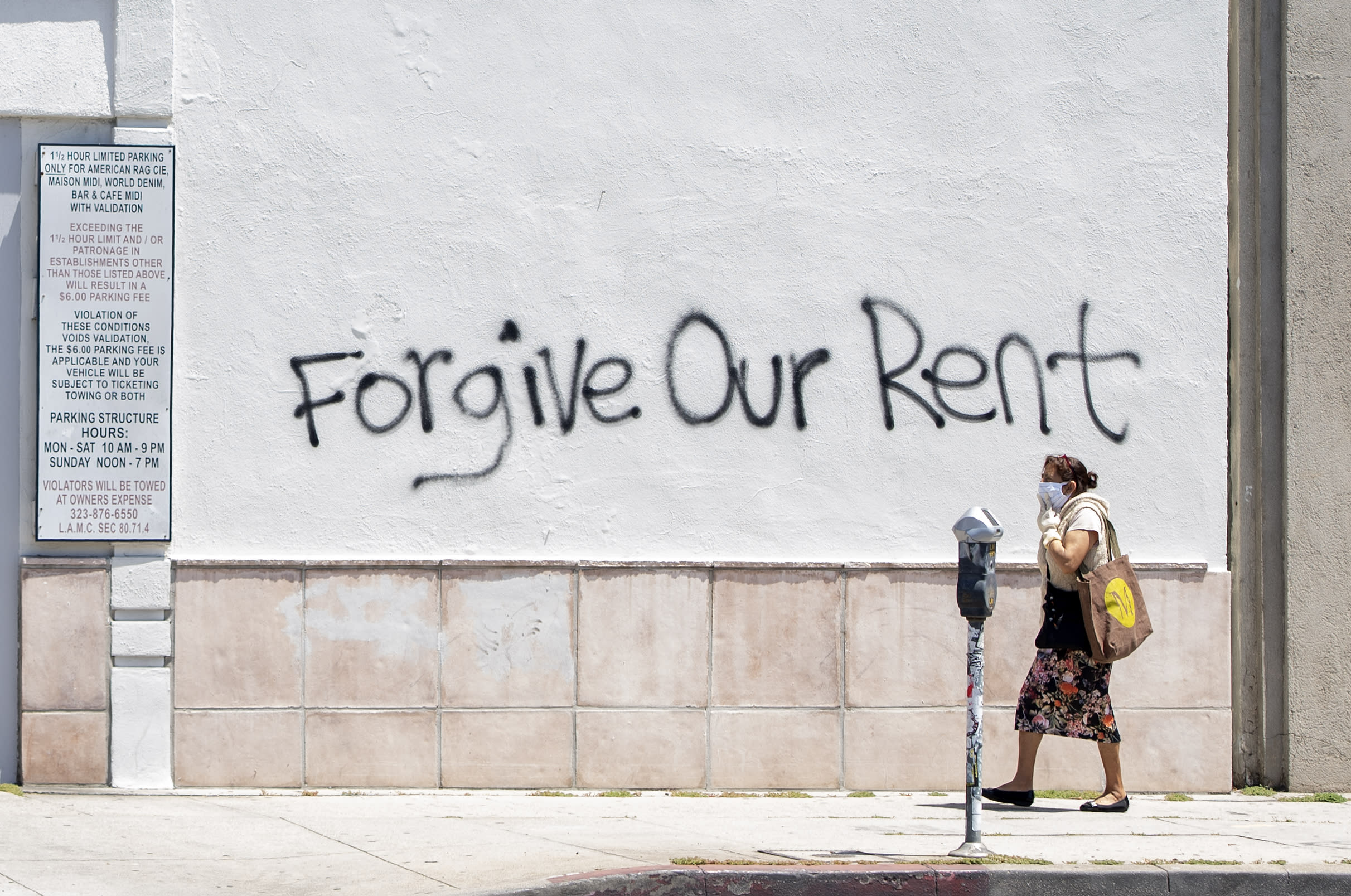 Many states’ pandemic-era moratoriums on renter evictions have expired. In some 30 states, eviction proceedings now can continue. Pictured, rent-forgiveness graffiti in Los Angeles.

Most of the relief measures included in the historic stimulus package Congress passed in March are coming to an end, even as the financial suffering of millions of Americans, and the virus to blame, shows no sign of abating.

Some 25 million Americans are receiving the additional $600 federal unemployment benefit established in the federal CARES Act, and the unemployment rate continues to rival Great Depression-era highs. Half of American households say they have lost income during the pandemic.

And the pain is far from over. There were more than 62,000 new reported cases of the virus in the U.S. just yesterday. As a result, many states are walking back their plans to reopen.

Congress returns to Washington this week to work on a second stimulus package.

The first set of legislation is credited with keeping as many as 16 million Americans out of poverty. If the relief measures in the CARES Act are allowed to expire without replacements, experts warn of an unprecedented financial crisis.

More from Invest in You:
Quarantine spending was more than just hoarding canned goods
Prices go up every year. That doesn’t mean you have to pay more
If you need cash, try these less-obvious sources

By July 31, people will stop receiving the $600 federal weekly unemployment checks. Yet the Congressional Budget Office expects jobless rates to stay elevated through 2021, and unemployment is still over 11%, with some areas especially hard hit.

In Massachusetts, for example, more than 17% of residents are out of work. More than 1 in 5 people in New York City are unemployed.

“If policymakers don’t act this week to extend the increased benefits, they will expire while unemployed workers and the economy need substantial support,” said Chad Stone, chief economist at the Center on Budget and Policy Priorities.

Without any extension of a federal unemployment benefit, jobless Americans will have only their weekly state checks to rely on. Thanks to the CARES Act, most workers will be able to collect these payments for 39 weeks, compared to the usual 26 weeks.

Still, experts say people can’t survive on their state benefits alone. The average state check nationwide stands at around $333 a week but dips as low as $100 in Oklahoma.

“Losing the $600 will mean people will put themselves in physical jeopardy by showing up to unsafe jobs to keep themselves afloat,” she added. “For the people who ca