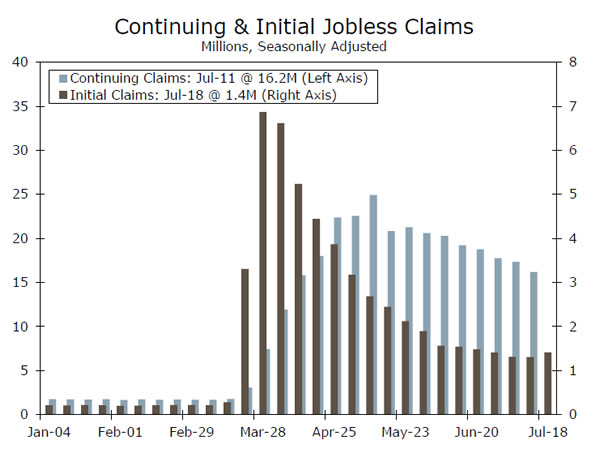 It was a relatively light week in terms of new economic data. Initial jobless claims for the week ending July 18 rose to just over 1.4 million, which was the first increase since the end of March. Continuing claims, which lag by a week, fell to 16.2 million.

The uptick in initial claims is likely the result of more restrictive measures taken in recent weeks to combat the resurgence in new COVID-19 cases around the country. Seasonal factors have perhaps created some noise lately (the number of claims fell slightly over the week on a non-seasonally adjusted basis), however the improving trend in claims seen over the past few months has likely stalled-out.

Critically, the upturn in claims comes just a week before federal emergency unemployment benefits are set to expire. Discussions on another round of fiscal relief started this week, but nothing is set in stone. These benefits have been a boon for household incomes, helping fuel the quick bounce back in consumer spending. With layoffs now back on the rise and 32 million individuals currently receiving either state or federal benefits, we doubt Congress will let them fully lapse.

What’s more, household finances being shored up by the CARES Act may help explain the relatively swift rebound in the housing market. Existing home sales jumped 20.7% during June to a 4.72 million-unit pace. That pace is still below the peak hit in February, but the steady rise in mortgage applications suggests even more improvement is on the way. Weekly mortgage purchase applications were up nearly 20% over the year for the week ending July 17. Mortgage rates have tested record lows in recent weeks, which is providing incentive for more renters to become homeowners.

The resiliency of housing lately may seem inconsistent with high unemployment. Job losses have been centered in the hospitality and retail sectors, however, where workers tend to be younger and are more likely to be renters rather than home buyers. The residual effects of the pandemic also appear to be altering the type and location of homes rented and sold. Renters in dense urban markets look to be flocking to the suburbs, where social distancing is easier. The rise of remote work has also made having an extra room and additional usable square footage more important. On top of this, life in the city has probably lost some its luster, with bars, nightclubs and cultural attractions now closed for the most part.

One potential impediment for continued improvement in the housing market, however, is the continued lack of homes available for sale. For-sale inventories rose modestly in June, increasing 1.3% to 1.57-million units, but t