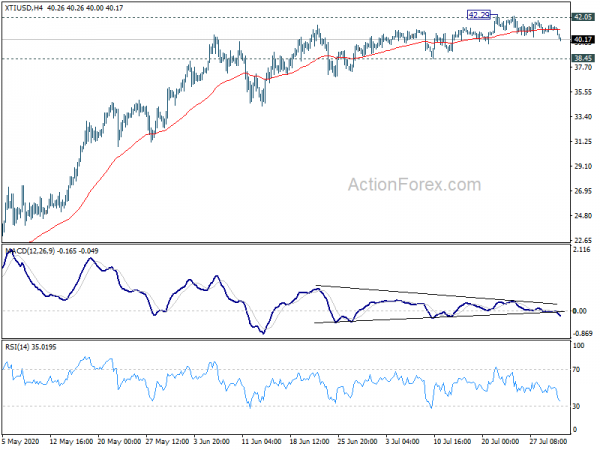 Commodity currencies are general under pressure today, following global stock markets lower. Record Q2 GDP contraction in Germany and US are weighing on sentiments. Rebound in jobless claims add to concern of double dip recession. US futures also tumble after President Donald Trump floats the idea of delaying 2020 presidential election. Oil appears to be starting the long-overdue correction. Canadian Dollar is the worst performing one for now, followed by Aussie and Kiwi. Sterling is the strongest, followed by Swiss Franc and then Dollar.

Technically, while 40 handle looks vulnerable in WTI crude oil, the larger rise is not in threat yet as long as 38.45 support holds. Current fall might just be part of a sideway consolidation pattern, after failing 42.05 key resistance on first attempt. However, break of 38.45 would signal that deeper correction is underway.

Accompanying the falling oil prices, EUR/CAD is extending near term rebound today. As long as 1.5654 support holds, further rise should be seen to 1.5991 short term top and possibly above. 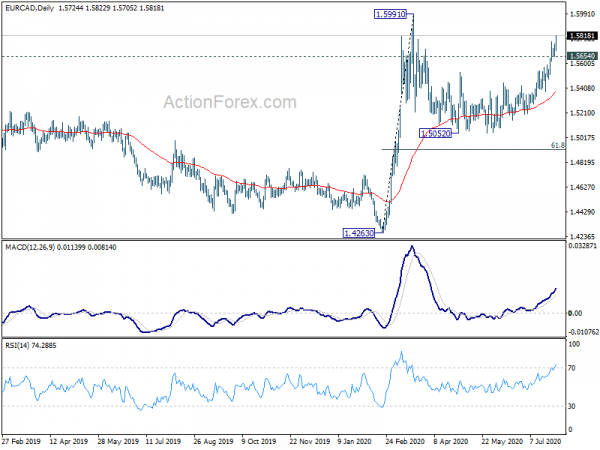 US GDP contracted -32.9% annualized in Q2, slightly less than expectation of -35.0%. That’s nevertheless the sharpest annualized decline in quarterly records dating back to 1947.

“The decline in second quarter GDP reflected the response to Covid-19, as `stay-at-home’ orders issued in March and April were partially lifted in some areas of the country in May and June, and government pandemic assistance payments were distributed to households and businesses,” BEA said in the release.

US initial jobless claims rose 12k to 1434k in the week ending July 25, slightly below expectation of 1450k. But that’s still the second straight week of increase in the figure. Four-week moving average of initial claims rose 6.5k to 1369k.

In its Monthly Bulletin, ECB said, “looking beyond the disruption stemming from the coronavirus pandemic, euro area growth is resuming with the gradual lifting of containment measures, supported by favourable financing conditions, the euro area fiscal stance and a resumption in global activity.” However, “uncertainty remains extremely elevated, making it very difficult to predict the likely extent and duration of the recovery.”

ECB reiterated that it “continues to stand ready to adjust all of its instruments, as appropriate, to ensure that inflation moves towards its aim in a sustained manner, in line with its commitment to symmetry.”