Dollar Firm into a Week of Election, Fed and NFP 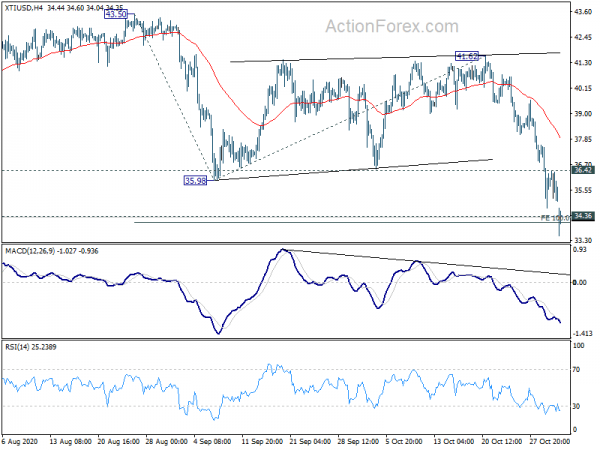 Dollar and Yen strengthen in general in Asian session today even though risk sentiments are not bad, as seen in rally in major indices. Solid data from China was enough to offset the pessimism over lockdowns in Europe, and the steep decline in oil prices. Sterling is currently the weakest one, followed by Aussie and Kiwi. Volatility is guaranteed for the week, with US Presidential election as the main event. Three central banks will meet while heavy weight data like ISMs and NFPs are featured.

Technically, WTI crude oil is now sitting at a key support zone after the fall from 43.50 resumed last week. We’d still look for strong support from 100% projection of 43.50 to 35.98 from 41.62 at 34.10, which is close to 34.36 structural support to contain downside and bring rebound. But firm break of 36.42 is needed to indicate short term bottoming first. Or, further fall remains in favor. Sustained break of 34.10 could bring further downside acceleration as fall from 43.50 is developing into a trend, for 161.8% projection at 29.45. 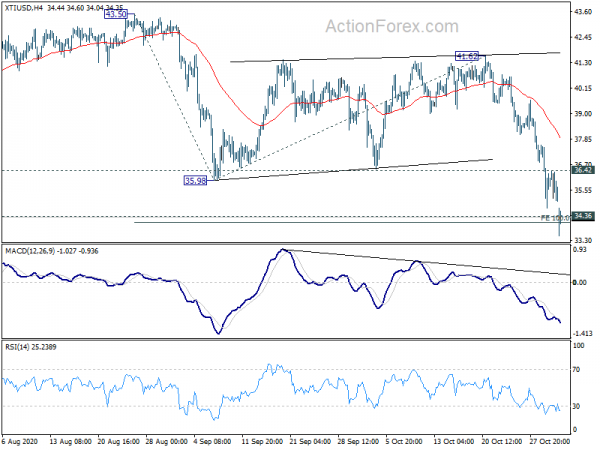 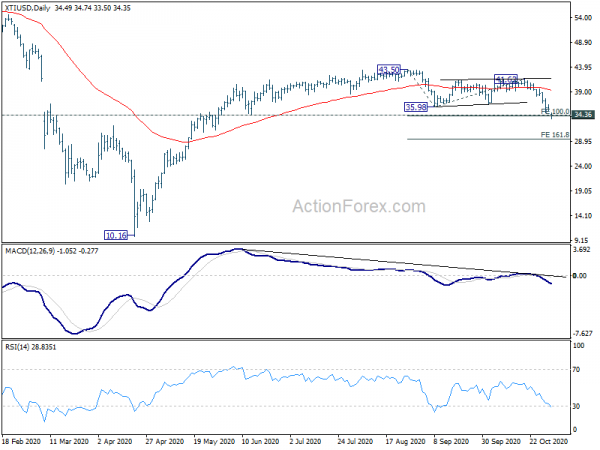 Ai Group Chief Executive Innes Willox said: “With the quantity of fiscal support easing in October and with the tax cuts only just starting to flow through, the lift in sales and the strong growth of new orders are particularly encouraging signs of improving household and business confidence. The solid national performance was achieved despite another month of contraction in Victoria. With restrictions in Victoria being lifted there are very good prospects of further strength in the closing months of 2020”.

Japan PMI manufacturing finalized at 48.7, particularly buoyed by the return to growth in export orders

Japan PMI Manufacturing was finalized at 48.7 in October, up from September’s 47.7. Output and new orders both fell at softer rates. Export orders also increased for the first time since November 2018. Business optimism reached highest since July 2017.

Usamah Bhatti, Economist at IHS Markit, said: “Japanese manufacturers will be particularly buoyed by the return to growth in export orders, as demand across key overseas markets such as China picked up… The sector reported a weakening employment trend in October, however, as staff numbers fell at a faster pace compared to September… An encouraging finding in October was the sustained improvement in business optimism. Approximately 38% of Japanese manufacturers surveyed foresee an increase in output over the coming 12 months, strengthening the index to its highest reading in over three years.”

China Caixin PMI Manufacturing rose to 53.6 in October, up from 53.0, beat expectation of 53.0. That’s also the highest level since August 2014. Markit noted that output rises sharply amid quickest increase in total new work for nearly a decade. However, pandemic dampens growth of new export orders.

Wang Zhe, Senior Economist at Caixin Insight Group said:. “To sum up, recovery was the word in the current macro economy, with the domestic epidemic under control. Manufacturing supply and demand improved at the same time. Enterprises were very willing to increase inventories. Prices tended to be stable. Business operations improved, and entrepreneurs were confident.

“But the twists and turns of overseas infections remained a headwind for exports. The full recovery of employment depends on stronger and more-lasting business confidence. As the economic indicators for consumption, investment and industrial output for September were generally better than expected, it is highly likely that the economic recovery will continue for the next several months. But there are still many uncertainties outside of China, so policymakers need to be cautious about normalizing post coronavirus monetary and fiscal policies.”

Three central banks to meet, US ISMs and NFPs watched too

Three central banks will meet this week. RBA has been very successful in setting market expectations for monetary easing at this week’s meeting. All key policy rates (cash rate, three year yield target, rate on term funding facility) will be lowered from 0.25% to 0.10%. Additional, RBA would likely extend its bond purchases to cover securities of longer maturities.

BoE is generally expected to keep Bank Rate unchanged at 0.10%. There are some expectations for ramping up the asset purchase program by another GBP 100B. Given the return to coronavirus lockdown and uncertainty over Brexit, the MPC does have solid reason to pull ahead any extra QE. Fed is generally expected to stand pat and there is little reason to deliver anything drastic in the week of election.

On the data front, US ISMs and non-farm payrolls will catch most attention. Job data from Canada will also be important. Trade balance from Australia, US and Canada, and job data from New Zealand will also be watched. Here are some highlights for the week:

EUR/USD’s declines continues today and intraday bias stays on the downside for 1.1612 support. Break there will confirm resumption of the corrective decline from 1.2011. Further fall should be seen to 38.2% retracement of 1.0635 to 1.2011 at 1.1485. On the upside, above 1.1704 minor resistance will turn intraday bias neutral first. But risk will stay on the downside as long as 1.1880 resistance holds, in case of recovery. 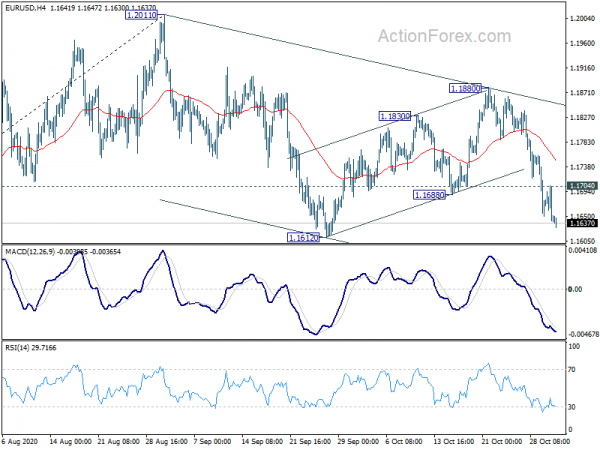 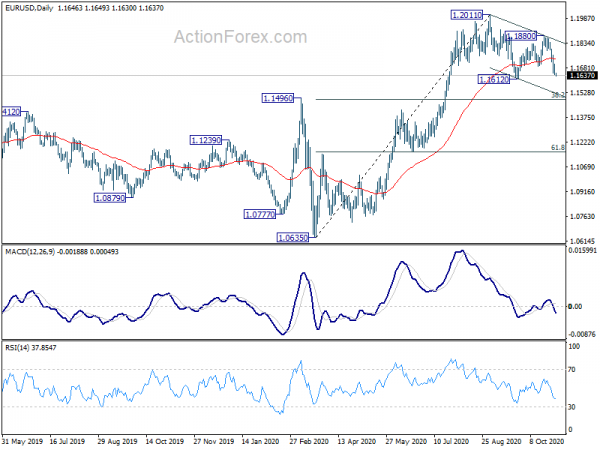