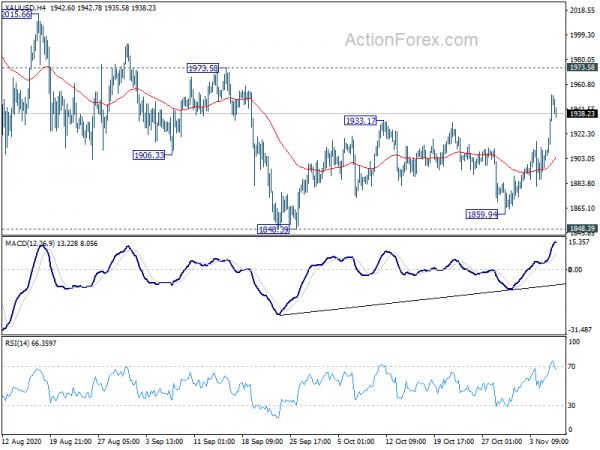 Dollar’s decline is slowing a little bit in Asian session but there is no sign of a turnaround. The greenback remains the worst performing one for the week, followed by Yen, on strong risk-on markets. Australian Dollar is the strongest one, followed by other commodity currencies. FOMC meeting overnight prompted little reaction. Traders are awaiting the final vote counts of US Presidential election. Focus will now turn to job data from the US and Canada.

Technically, Gold’s firm break of 1933.17 resistance confirmed resumption of the rebound from 1840.39. That’s a solid bullish signal and focus will now be on whether it could overcome 1973.58 resistance decisively. 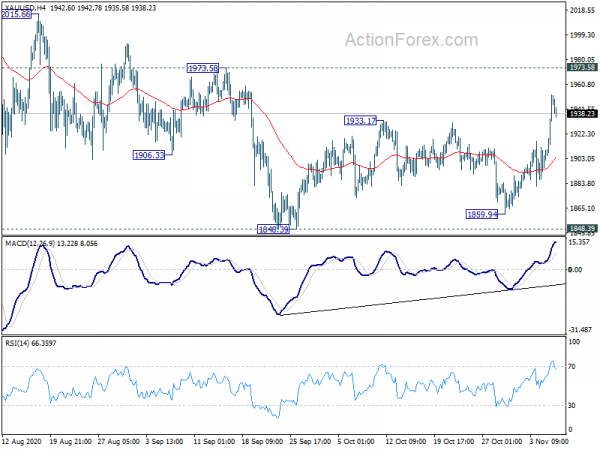 As for stocks, NASDAQ is now close to making new record high above 12074.06, which might come as early as today.

As widely anticipated, the Fed left the policy rate unchanged at 0-0.25% and asset purchases at US$120B per month. The decisions were made unanimously. The members acknowledged that economic recovery remained under way. Yet, they warned of the downside risks to growth amidst the huge uncertainty of the coronavirus pandemic. The members pledged to use the “full range of tools to support the U.S. economy in this challenging time”.

In the post meeting press conference, Fed Chair Jerome Powell said “the recent rise in new Covid-19 cases, both here in the United States and abroad, is particularly concerning.” Outlook remains “extraordinarily uncertain”. He said that “the fiscal policy actions that have been taken thus far have made a critical difference.” “Even so, the current economic downturn is the most severe in our lifetimes,” he added. “We’ll have a stronger recovery if we can just get at least some more fiscal support, when it’s appropriate and at the size Congress thinks is appropriate.”

Powell also indicated that FOMC members have discussed the asset purchase program. “We understand the ways in which we can adjust the parameters of it to deliver more accommodation if it turns out to be appropriate,” he said. The minutes could reveal more details about that discussions, which would be interesting.

RBA SoMP: Interest rates have been lowered as far as it makes sense

In the Statement on Monetary Policy, RBA noted that ” despite the somewhat better recent outcomes in Australia, the recovery was expected to be extended and bumpy”. Hence, “to further support the recovery and complement the significant support coming from fiscal policy, the board therefore decided to introduce a further package of measures.”.

The measures announced on Tuesday included reduction in cash rate target and 3-year AGS yield target to 0.10%. Bedsides, measures include purchases of AUD 100B of government bonds of maturities from 5 to 10 years for the next 6 months.

On interest rate, RBA said “interest rates have been lowered as far as it makes sense to do so in the current environment… The board considers that there is little to be gained from short-term interest rates moving into negative territory and continues to view a negative policy rate as extraordinarily unlikely.”

“At its future meetings, the board will be closely monitoring the impact of bond purchases on the economy and on market functioning, as well as the evolving recovery from the p