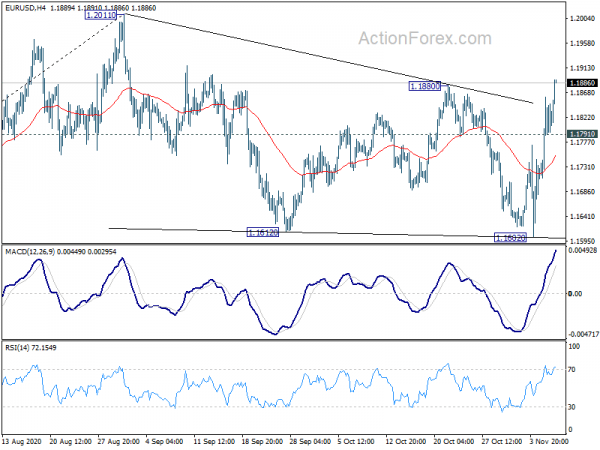 Dollar’s selloff continues today despite stronger than expected employment data. Though, selling focus has turned to against Euro and Swiss Franc. Australian Dollar is taking a breather, together with global stock markets. There is no doubt that Dollar will end as the worst performing one for the week, followed by Yen. Commodity currencies will stay end as the strongest ones.

Technically, EUR/USD break of 1.1880 resistance is another evidence of down trend resumption in Dollar. Further rise should now be seen to 1.2011 resistance for confirmation. USD/CHF has already taken the lead by breaking 0.8998 low. 0.7413 resistance in AUD/USD, and 1.2994 low in USD/CAD are the next levels to watch, probably next week.

Canadian job market grew 83.6k in October, above expectation of 59.0k. Most of the growth came from full-time work at 69k. Unemployment rate ticked down slightly by 0.1% to 8.9%.

RBA SoMP: Interest rates have been lowered as far as it makes sense

In the Statement on Monetary Policy, RBA noted that ” despite the somewhat better recent outcomes in Australia, the recovery was expected to be extended and bumpy”. Hence, “to further support the recovery and complement the significant support coming from fiscal policy, the board therefore decided to introduce a further package of measures.”.

The measures announced on Tuesday included reduction in cash rate target and 3-year AGS yield target to 0.10%. Bedsides, measures include purchases of AUD 100B of government bonds of maturities from 5 to 10 years for the next 6 months.

On interest rate, RBA said “interest rates have been lowered as far as it makes sense to do so in the current environment… The board considers that there is little to be gained from short-term interest rates moving into negative territory and continues to view a negative policy rate as extraordinarily unlikely.”

“At its future meetings, the board will be closely monitoring the impact of bond purchases on the economy and on market functioning, as well as the evolving recovery from the pandemic, including the outlook for jobs and inflation,” the statement noted.

EUR/USD’s rally continues today and hits as high as 1.1890 so far. Break of 1.1880 resistance adds to the bullish case that consolidation from 1.2011 has completed at 1.1602. Intraday bias remains on the upside for 1.2011 and break will resume larger rally from 1.0635. On the downside, though, below 1.1791 minor support will mix up the outlook and turn intraday bias neutral first. 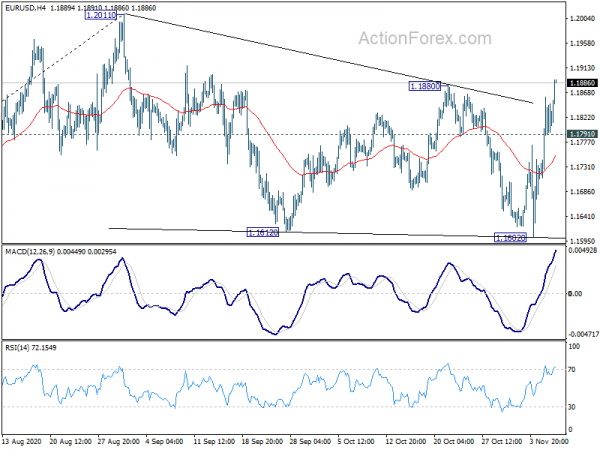 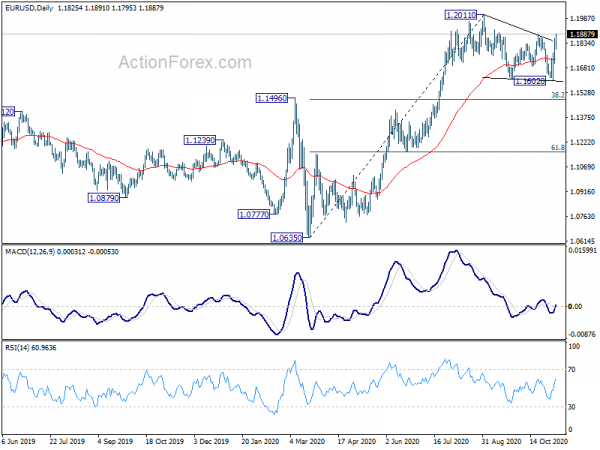