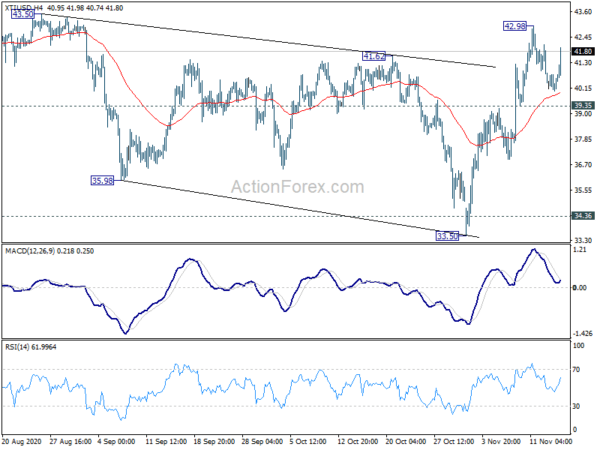 Global investor sentiments are boosted by more good news on coronavirus vaccines. Moderna said it’s vaccine was 94.5% effective in preventing COVID-19, based on interim data from a late stage trial. Major European indices are trading up while DOW future is gaining over 450 pts. In the background, solid data from China and Japan released in Asia provided the foundation for stock market rally already. In the currency markets, Yen and Swiss Franc are the worst performing ones. Dollar reversed some of earlier losses and turned mixed. Commodity currencies are the strongest so far.

Technically, the development in forex markets are relatively mixed through. USD/CAD is a pair to note and break of 1.3057 minor support will indicate completion of last week’s recovery. Deeper fall would be seen back to retest 1.2928 low. Such development would depend on whether WTI crude oil could break through last week’s high at 42.98. But such development wouldn’t necessarily mean general weakness in Dollar. EUR/USD and GBP/USD could indeed be heading back to 1.1745 and 1.3106 minor support levels. 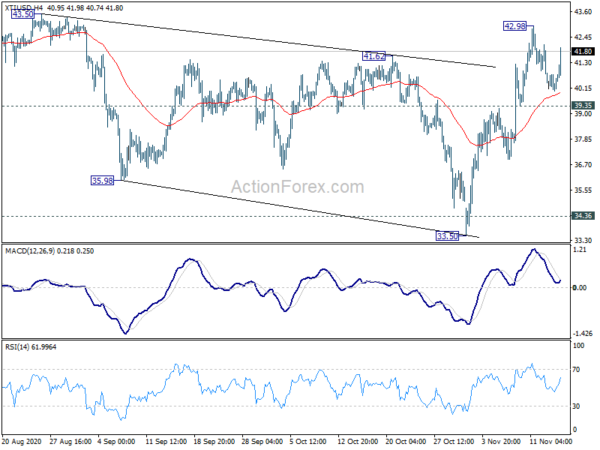 US Empire state manufacturing dropped to 6.3, but future conditions steady

Germany’s Bundesbank said in the monthly report that that strong recovery in Q3 will not continue in Q4. “The main reasons for this are the recent resurgence of the pandemic in this country and in neighboring European countries, as well as the additional containment measures that have now been decided on for November.”

Nevertheless, as the restrictions are “far less than in March and April”, a “similarly severe slump as in Spring is not very likely”. Also, “the international production conditions have so far hardly been affected despite the very high number of new infections throughout Europe”.

RBA Governor outlined four changes on the monetary policy front during 2020. Firstly, the nature of RBA” forward guidance has moved to place much more weight on actual outcomes, rather than forecast outcomes”. An example is seen in the statement, where RBA said “the Board will not increase the cash rate until actual inflation is sustainably within the 2 to 3 per cent target range.” For this to occur wages growth will have to be “materially higher than it is currently”, which requires “significant gains in employment and a return to a tight labour market.” A second and related change has been a shift in the relative weight given to jobs and inflation.

The third change is a “strengthening in the gravitational pull of low global interest rates. Ignoring this would have “obvious implications for our exchange rate and our economy.” “Over the medium term, I do expect to see a time when Australia’s strong economic conditions once again justify higher interest rates. But today, during a global pandemic when a lot of people have lost their jobs and many businesses are struggling, is not the time for that.”

The fourth change was “the return to a world in which quantities, not just prices, matter.”

Economy Minister Yasutoshi Nishimura also sounded cautious as he reminded people of the JPY 30T spare capacity. “We can’t make up for all of the output gap just with public works spending. We also need to spur private investment. But the size (of the output gap) is something we’ll look at” in compiling the new spending package, he said.

BoJ board member Takako Masai reiterated in a speech that the baseline scenario is for that the economy is “likely to follow an improving trend with economic activity resuming and the impact of COVID-19 waning gradually”. Still “the pace is expected to be only moderate while vigilance against COVID-19 continues”. Thereafter, as the impact subsides globally, the economy is projected to “keep improving further with overseas economies returning to a steady growth path.”.

However, she had a cautious view on the outlook for two reasons. Firstly, growth in world trade volume had already been slowing since mid-2018, due to US-China trade friction. Japan’s export and production levels “had already been on a downtrend” prior to the pandemic. Secondly, global services sector had a growth presence in Japan’s labor market in recent years, but it’s projected to “recover at only a moderate pace”.

Additionally, she pointed out the risks to outlook, including (1) the impact of COVID-19 on domestic and overseas economies; (2) firms’ and households’ medium- to long-term growth expectations; and (3) developments in the financial system. Additionally, attention should be paid to US-China tensions, Brexit, geopolitical risks and global financial markets developments.

In China, industrial production grew 6.9% yoy in October, matched expectations. The figure was unchanged from September’s growth. Fixed asset investment grew 1.8% ytd yoy, above expectation of 1.6%. But retail sales rose only 4.3% yoy, below expectation of 5.0% yoy. That’s nevertheless still the strongest rise this year, as led by 12.5% growth in auto sales.

Overall, the set of data suggested that China’s economy maintained broad-based acceleration in October, which could likely continue through the rest of Q4. Policy stimulus continued to had a positive impact on both investment and industrial output. The consumer sectors were also returning to normal.

EUR/USD dips mildly in early US session but stays well inside range below 1.1920. Intraday bias remains neutral for the moment. On the upside, break of 1.1920 will reaffirm the case that consolidation from 1.2011 has completed at 1.1602. Further rise would be seen to retest 1.2011 high. However, break of 1.1745 support will turn bias to the downside to extend the consolidation with another falling leg. 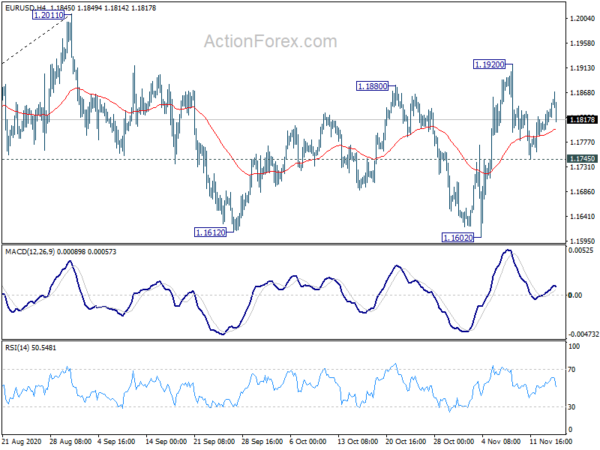 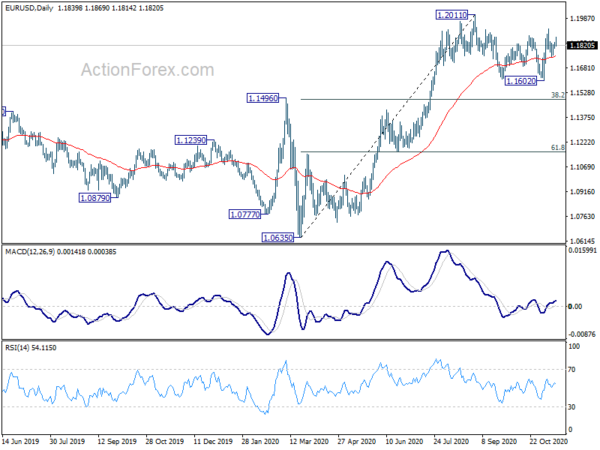