No Range Breakout in Dollar Yet Despite Vaccine Optimism 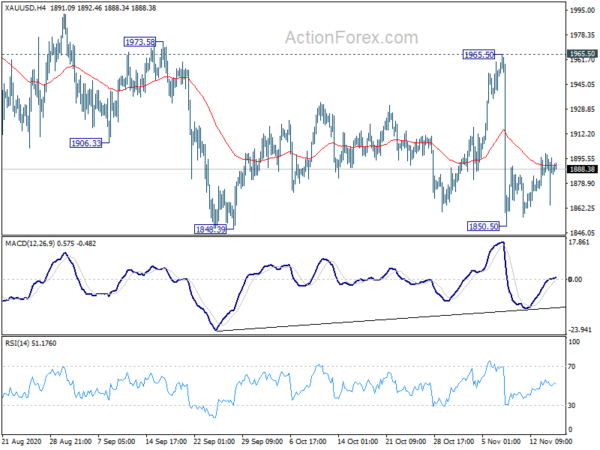 Vaccine optimism pushed DOW to new record high overnight and positive sentiment continues in Asian session. Dollar, Yen and Swiss Franc are the weaker ones, while commodity currencies are strongest. Though, major pairs and crosses are generally bounded inside last week’s range. That is, Dollar and Yen are holding above near term lows despite the selloff. Currency traders are still not committed to push the pairs to resume the near term trends.

Technically, Gold recovered after hitting 1850.50, but there was no follow through buying to get rid of 4 hour 55 EMA yet. Another fall is still in favor through 1846.39 key support, the resume the decline 2075.18 high. However, sustained trading above 4 hour 55 EMA would set the base for further rise back to 1965.50 resistance. That, if happens, could indicate that Dollar bears are finally back in full gear. 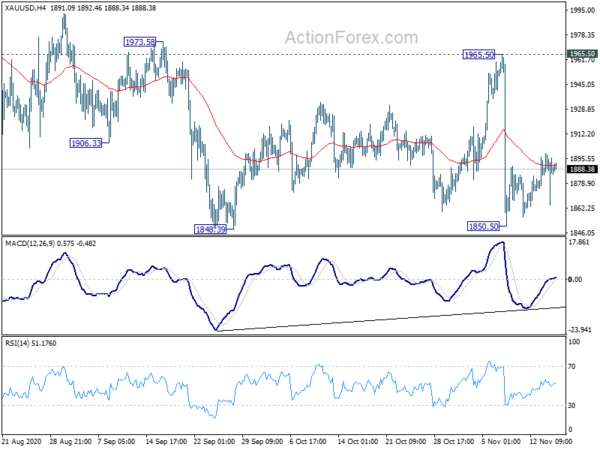 RBA minutes: Focus ahead would be government bond purchase program

Minutes of the November 3 RBA meeting noted that the board is “prepared to do more if necessary”, after delivering a package of additional stimulus. Though, “focus over the period ahead will be the government bond purchase program”.

Under the current program to purchase longer-dated bonds, RBA would buy nominal bonds issued by the Australian Government and by the states and territories, with an expected 80/20 split. Purchases would be done through secondary market, but not directly from the government. Also, RBA “remained prepared to purchase bonds in whatever quantity is required to achieve the 3-year yield target.”

As for interest rate, with cash rate target at 0.10% and exchange settlement rate at 0%, they would have been “lowered as far as it made sense to do so in the current environment”. There is “little to be gained from short-term interest rates moving into negative territory”. Negative policy rate is seen as “extraordinarily unlikely”.

ECB Chief Economist Philip Lane said that even though debt levels surged due to fiscal spending across Europe to counter pandemic impacts, they would remain sustainable.

“There is no reason to believe that this has some kind of intrinsic dynamic that will lead us to a return of the conditions of ten years ago,” Lane added. “The cost of making the payments on this debt in the years to come will be quite contained.”

Intraday bias in USD/CAD remains neutral at this point. With 1.3057 minor support intact, another rise could still be seen to 55 day EMA (now at 1.3203) and above). But overall, larger decline form 1.467 is expected to resume sooner or later as long as 1.3389 resistance holds. On the downside, break of 1.3057 minor support will turn bias to the downside for retesting 1.2928 low. 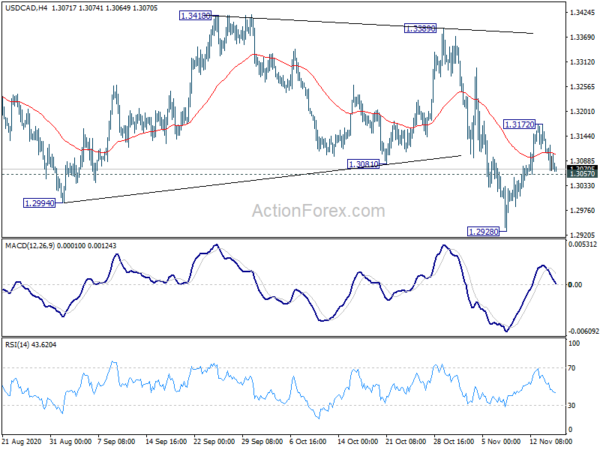 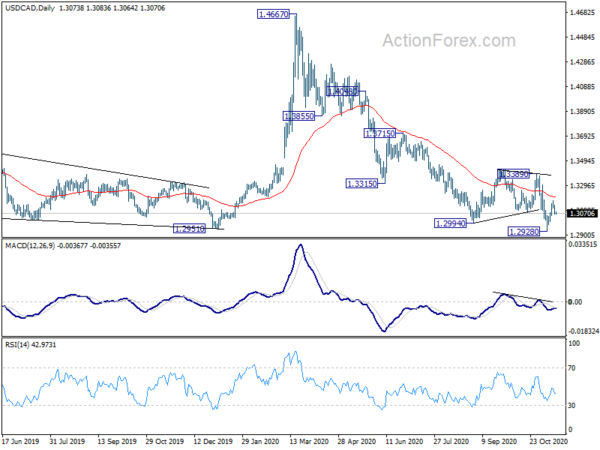