Dollar Still in Recovery Despite Rise in Initial Jobless Claims 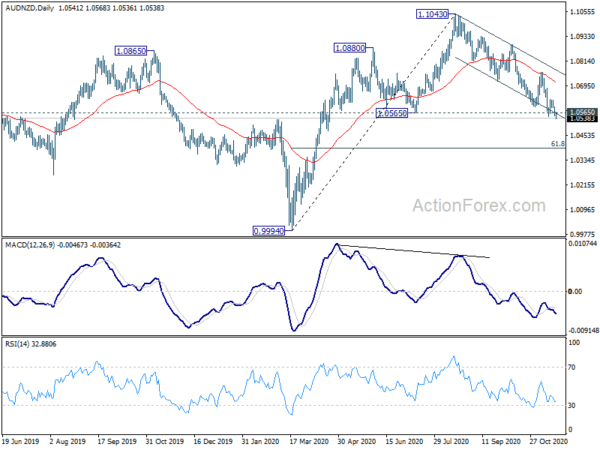 Dollar rises mildly today despite the first rise in initial jobless claims in five weeks. Euro and Swiss Fran are following closely. Global markets are still engaging in consolidative trading, with mild weakness in European equities and US futures. Australian Dollar is leading New Zealand Dollar lower. Still, there is no clear development in the forex markets for now. Most major pairs and crosses are staying inside last week’s range. Breakout is still awaited.

Technically, while trading in currency markets are dull and subdued, there is one development to note. AUD/NZD resumes recent decline from 1.1043. It now seems that 1.0565 structural support is taken out firmly, finally, with today’s fall. The break of near term channel support also suggests some downside acceleration. The fall from 1.1043 might be reversing whole rise from 0.9994, rather than just correcting it. In either case, further fall is now likely for 61.8% retracement of 0.9444 to 1.1043 at 1.0395 next. 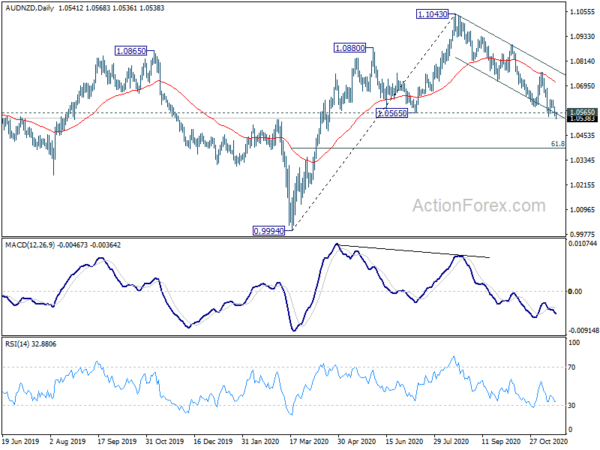 US initial jobless claims rose back to 742k, continuing claims dropped to 6.37m

Also from the US, Philly Fed manufacturing survey dropped to 26.3 in November, down form 32.3, but beat expectation of 24.0. From Canada, ADP employment dropped -7.5k in October.

UK Trade Minister Liz Truss told the Parliament today, “we’re determined to reach a deal with Canada before the end of the year — it will help our trade from cars to beef to fish to whiskey.” “I do hope that in the future, as Canada is a member of the Trans-Pacific Partnership which has advanced chapters in areas like data and digital, that we will be able to go much further and build a much deeper relationship with Canada,” she added. The UK Department for International Trade also said negotiations are “at an advanced stage and progressing well.”

Last week, Canadian Prime Minister Justin Trudeau also said a trade deal could be reached by January 1. “I know that rolling over and demonstrating free trade deals is important for the U.K. government. Canada is a really easy one. We’re there for it. We’d like to do it, so I am very hopeful that it’s going to get done but that’s up to the U.K. government,” Trudeau said.

ECB Lagarde: PEPP and TLTROs are the likely main tools for policy adjustment

At a European Parliament heading, ECB President Christine Lagarde warned that “we continue to be confronted with serious circumstances, from both a health and an economic perspective…The key challenge for policymakers will be to bridge the gap until vaccination is well advanced and the recovery can build its own momentum.”

Lagarde added, “the euro area economy is expected to be severely affected by the fallout from the rapid increase in infections and the reinstatement of containment measures, posing a clear downside risk to the near-term economic outlook.” She also reiterated that ECB will “recalibrate” its instrument on the basis of the updated economic projections and reassessments in December.

She also noted that the pandemic emergency purchase programme (PEPP) and targeted longer-term refinancing operations (TLTROs) “have proven their effectiveness in the current environment and can be dynamically adjusted to react to how the pandemic evolves.” So, they are “likely to remain the main tools for adjusting our monetary policy.”

Bjorn Jarvis, head of Labour Statistics at the ABS, said: “This strong increase means that employment in October was only 1.7 per cent below March, and reflects a large flow of people from outside the labour force back into employment. Encouragingly, the rise in employment was also accompanied by a strong rise in hours worked,