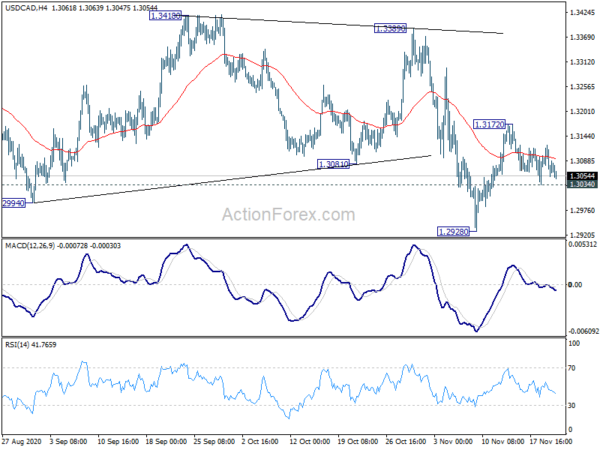 Dollar would probably end as the worst performing for the week, followed by Yen and Swiss Franc. But they’re generally staying familiar range, like other major pairs and crosses. Investors are struggling to decide on a direction, despite the news of vaccines, or the split between US treasury and Fed. The slow progress of Brexit talks, and coronavirus infection of EU’s delegation, were also ignored. Both UK and Canada posted strong retail sales data today, but triggered little reactions.

WTO Good Trade Barometer jumped to 100.7, but growth likely to slow in Q4

WTO said it’s Good Trade Barometer marked a dramatic improvement to 100.7. It hit a low at 84.5 back in August, ” which reflected collapsing trade and output in the second quarter as lockdowns and travel restrictions were employed to fight the virus”.

It added, “the latest reading indicates a strong rebound in trade in the third quarter as lockdowns were eased, but growth is likely to slow in the fourth quarter as pent-up demand is exhausted and inventory restocking is completed.”.

However, trade-related uncertainty “remains high” with a second wave of pandemic underway in Europe and North America. But progress has been reported in vaccine development as a “more positive note”.

Canada retail sales rose 1.1% mom to CAD 53.9B in September, above expectation of 0.2% mom. That’s also the fifth consecutive monthly increases since the record decline in April. Core retail sales rose 1.1%, also well above expectation of 0.0% mom. Sales were up in 9 of 11 subsectors, representing 93.2% of retail trade. Rounding out Q3, sales were up 22.6% comparing with Q2 in volume terms.

UK retail sales rose 1.2% mom, 5.8% yoy in October. Retail sales ex-fuel rose 1.3% mom, 7.8% yoy. ONS said: “We see sharp falls in sales at the start of the lockdown in March and April 2020, followed by strong growth to recovery in May and June 2020. A slower rate of growth is seen in the latest three months, with volume sales in October 2020 now 6.7% higher than February’s pre-lockdown levels.”

Japan PMI Manufacturing dropped to 48.3 in November, down from October’s 48.7, missed expectation of 48.9. The data signalled a deterioration in the sector for the 19th straight month. In particular, production and new orders contracted at faster rates, as well as employment. PMI Services also dropped to 46.7, down from 47.7. PMI Composite dropped to 47.0, down from 48.0.

Bernard Aw, principal Economist at IHS Markit, said: “Looking ahead, the path to recovery remains fraught with challenges as a renewed rise in the number of COVID-19 cases worldwide could dampen global economic activity and trade, thereby putting Japanese exporters in a tough situation”.

Japan CPI core dropped to -0.7% yoy in Oct, worst in nearly a decade

Japan CPI core (all item ex-food), dropped to -0.7% yoy in October, down from -0.3% yoy, matched expectations. That’s also the worst deflation reading in nearly a decade, since March 2011. Nevertheless, the poor reading was seen as a result of high base effect due to sales take hike, and a recent government campaign to boost tourism.

Ben James, Director of Quarterly Economy Wide Surveys, said “The reopening of retail stores in Victoria at the end of October led to a boost to all industries, with the exception of food retailing. Victoria rose 5.2 per cent from September 2020 but remains 5.7 per cent below the levels of October 2019.”

Intraday bias in USD/CAD stays neutral at this point. With 1.3034 minor support intact, another rise cannot be ruled out. However, near term outlook remains bearish as long as 1.3389 resistance holds, and down trend resumption is expected. On the downside, break of 1.3057 minor support will turn bias to the downside for retesting 1.2928 low. 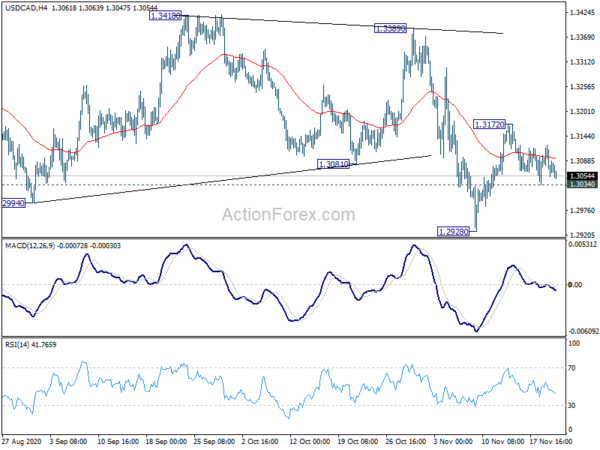 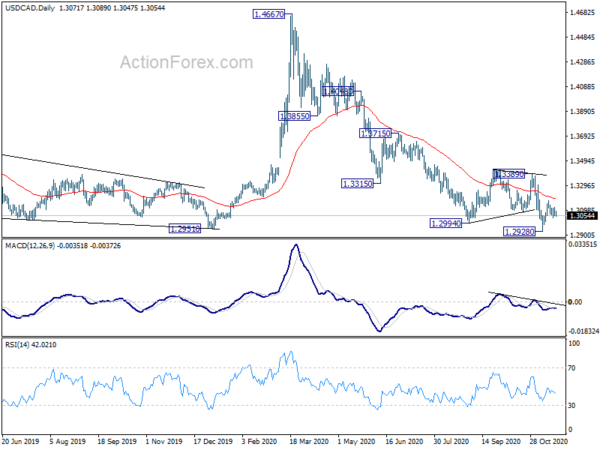