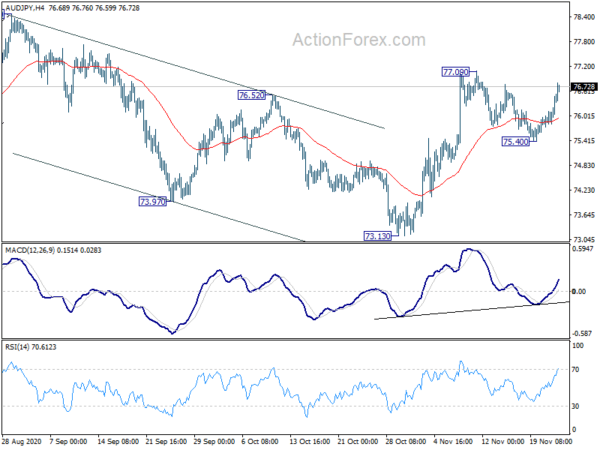 Commodity currencies remain the strongest one for today with help from risk-on markets. Euro is also firm, shrugging off deterioration in business expectations as indicated by Ifo’s data. Though, selling is focusing on Swiss Franc and Sterling for now. Dollar dropped notably earlier today but there is no clear follow through selling so far. The extended decline in Gold is somewhat limiting downside for the greenback. 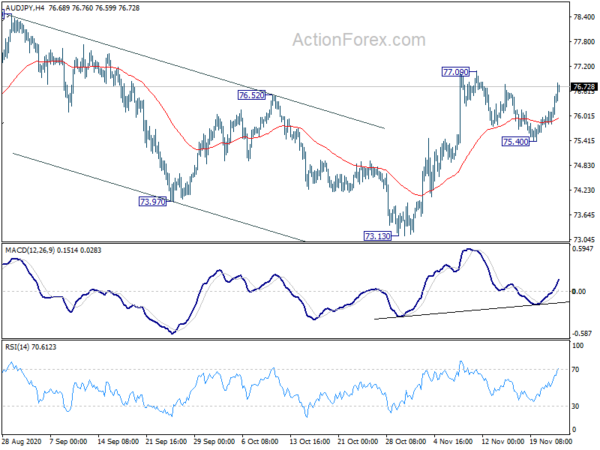 Ifo said: “The drop was due above all to companies’ considerably more pessimistic expectations. Their assessments of the current situation were also a little worse. Business uncertainty has risen. The second wave of coronavirus has interrupted Germany’s economic recovery.”

BoE Haskel: there will be long-term scarring effects even if vaccine comes

BoE policymaker Jonathan Haskel said recent vaccine development offered some light at the end of the tunnel for the UK. However, even if the vaccine comes, there will be “long-term scarring” effects. Such effects are hard to scale for now.

Haskel also said the central is not running out of policy tools. It still have plenty that can be down in terms of firepower.

New Zealand Finance Minister Grant Robertson urged RBNZ to include house price stability as part of its broad monetary remit. The triggered speculations that the central bank would refrain from launching another round of massive stimulus, including negative interest rates.

In a letter to RBNZ Governor Adrian Orr, Robertson said he’s concerned with “recent rapid escalation in house prices, and forecasts for this to continue”. He’s also “concerned about the potential that these price increases may present a financial stability risk to the economy, particularly when monetary policy returns to more normal settings.”

“With an extended period of low interest rates, and some time before housing supply can catch up with demand, now is the time to consider how the Reserve Bank may contribute to a stable housing market,” he added. “Undertaking this work is not to suggest the Reserve Bank bears responsibility for house prices, but simply that it should have regard to something that is influenced by monetary policy.”

Orr said RBNZ will consider the government’s suggestion. At the same time “there are many long-term, structural issues at play.”

In a speech, RBA Deputy Governor Guy Debelle said the comprehensive package of measures implemented through this year “has materially lowered the structure of interest rates in the Australian financial system”. Additionally, “the decline in interest rates across the yield curve has lowered the exchange rate, relative to what it otherwise would be.”

He acknowledged that the news about vaccines “should help bolster that confidence”. But recovery will be “uneven”. “It is likely to be some time before the vaccines will be widely available and distributed.”

BoJ Governor Haruhiko Kuroda told the parliament that there is no need to “overhaul our projections” despite resurgence of coronavirus infections globally. The central bank forecasts the economy to contract -5.5% in the fiscal year ending March 2021, then expand 3.6% in the following year.

“Our view is that Japan isn’t heading toward deflation, though we’re watching developments in service consumption and capital expenditure carefully,” he added.

Kuroda also said, “there is no need now to review our policy framework. But there could be debate at an appropriate timing in the future.”

EUR/USD is still bounded in range below 1.1920. Intraday bias remains neutral and outlook is unchanged. On the upside, break of 1.1920 will reaffirm the case that consolidation from 1.2011 has completed at 1.1602. Further rise would be seen to retest 1.2011 high. However, break of 1.1745 support will turn bias to the downside to extend the consolidation with another falling leg. 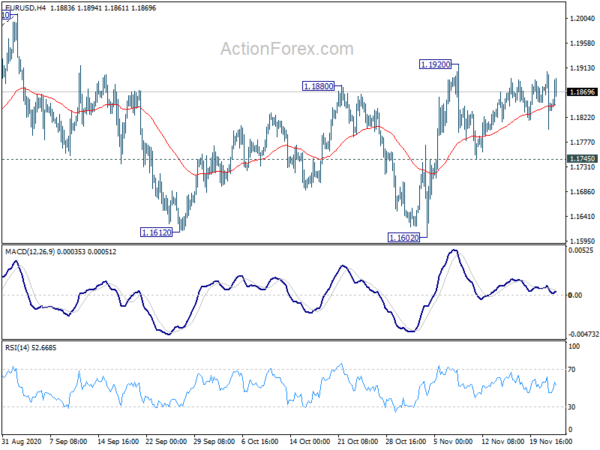 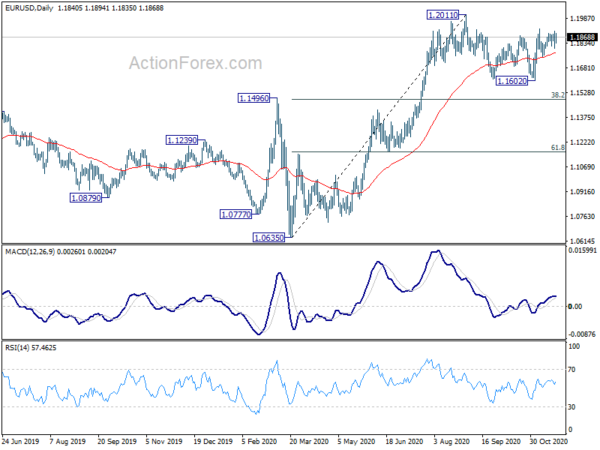