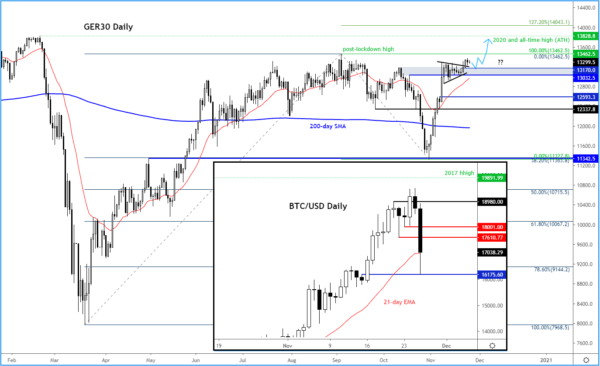 European markets started on the back foot this morning as energy stocks and financials saw some early weakness, with shares in Lloyds falling 3% at the open. However, it remains to be seen whether the weakness for the major EU indices can last long given that the underlying sentiment remains bullish. Expect a slower second half of the day insofar as traditional markets are concerns as Wall Street is closed for Thanksgiving and economic calendar is void of any major news. That’s not to say it is going to be quiet everywhere. Indeed, Bitcoin tanked nearly 15% this morning, before bouncing back to trim its losses to about 9% at the time of writing. Other cryptos have also fallen in Bitcoin’s slipstream. 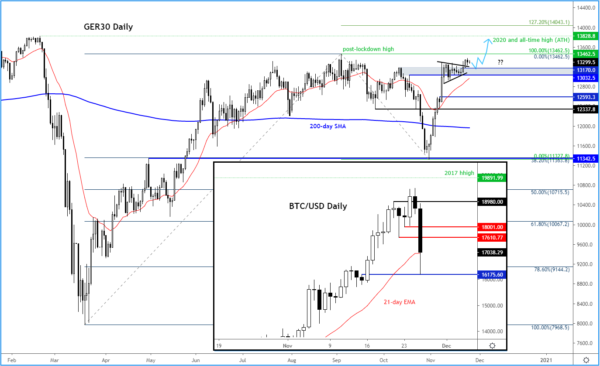 With many US investors likely to be off on Friday as well, the slight weakness in stocks and the plunge in Bitcoin can, at least partially, be attributed to profit-taking. This is especially the case for Bitcoin as the crypto neared its previous all-time high of just under $20K. Clearly some “HODL”-ers from 2017 probably saw this as the perfect opportunity to take profit, while others also feared that the current economic situation does not justify Bitcoin breaking past $20K, even if the long term outlook continues to remain bullish because of mainstream acceptance and limited supply. A correction was therefore almost inevitable and is probably not a bad thing for the health of the long-term rally.

Meanwhile for equities, concerns over valuations are starting to slowly rise again after the recent news of vaccines provided the stimulus-supported markets a fresh shot in the arm, which helped to keep the rally that began in March ticking over. So, while stocks can certainly extend their gains, there is a risk that in the not-too-distant future, reality will bite and cause a correction in the mighty stock markets.

The current virus situation across the world and in the US is starting to hurt the recovery as global Covid-19 cases topped 60 million. With lots of people in America likely to travel this week to visit family for Thanksgiving, this could make things worse. New York has already registered the most virus cases since April while California broke its daily record for new infections. In fact, Wednesday’s US data dump showed some signs of strain at the world’s largest economy with a jump in jobless claims as a result of the fresh lockdowns. Things therefore might get uglier before they get better, especially as government’s aid for virus relief expires while there is still no agreement on a new stimulus package.

When will EU’s pandemic relief funds be released?

In Europe, too, the pandemic funds have been tied up with leaders of Poland and Hungary stopping the bloc’s coronavirus fund passing into law and delaying the flow of billions of euros for virus-hit countries. The longer it takes for the stimulus programs on both sides of the Atlantic to be passed, the greater the economic costs are likely to be. Still, a breakthrough in EU stimulus is more likely than in the US. Here, if Poland and Hungary do not make a compromise soon, the majority of EU member states can settle the case through the help of European Court of Justice if they can prove that the handful of members blocking the funds is endangering the bloc’s financial interests.

As a result, the risk that the EU virus relief funds will not be released soon is low and that is precisely why EU markets remain supported – for now.

Investors are also obviously very hopeful that the vaccines will be distributed in early 2021 and this will give rise to pent-up demand as consumers and businesses look forward to more normal times ahead.

But are the markets under-pricing the risks of the long-term damage of the pandemic on the world economy? This is something that could come back to haunt investors in the months ahead as many businesses have closed down for good and many jobs will never return. Homeowners might struggle to pay their mortgages when government support is lifted, causing some to lose their homes and push down house prices, trapping some in negative equity. What’s more, governments worldwide will have to raise taxes to recoup the amount of money they have splashed supporting the economy during lockdown. In the US, the new administration is likely to raise taxes on corporations, and Biden will not be as obsessive as Trump in trying to pump the stock market. Furthermore, the Republicans in the Senate they will provide stiff resistance to Democratic efforts of introducing a large stimulus package.

Equity and commodity prices have surged higher in recent weeks all in hopes over a strong recovery in demand. So, right now, sentiment is still positive, which means the path of short-term resistance remains to the upside for stocks and most commodities. However, further out, things might not be as rosy as the markets are pricing in right now and there are plenty of economic risks that are perhaps not correctly reflected in asset prices.