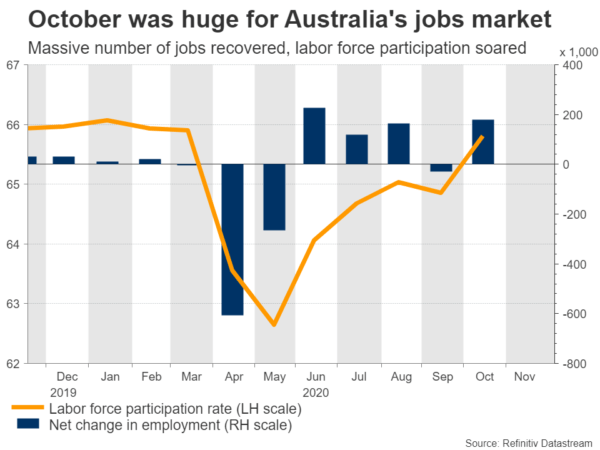 The Reserve Bank of Australia will hold its final meeting for the year at 03:30 GMT Tuesday. Having cut rates last month, no action is expected this time, so the market reaction will depend on the language of the accompanying statement. Economic data have improved lately and vaccines have been announced, so a slightly more optimistic tone may be warranted. That would argue for a positive, but minor, reaction in the aussie.

It took some time, but earlier this month the RBA finally decided that it was sensible to provide some more support to the economy, to accelerate the recovery process. The central bank cut interest rates by 15 basis points to 0.1%, expanded its QE program, and confirmed it is ready to do more if necessary.

One could argue that all this won’t make much difference for the real economy, but the RBA thinks it will, because of the effects on the exchange rate. The aussie has rallied very powerfully lately. While most of this rally is linked to the vaccine news, the RBA argues the currency would have been even higher by now if it hadn’t delivered this stimulus package. A stronger currency would be a threat to inflation and growth.

More broadly, the Bank signaled a change in strategy. First, more rate cuts are “extraordinarily unlikely”. If more support is needed, it will come through bigger QE doses. Second, the main variable that will guide future decisions will be the labor market. Addressing the high unemployment rate is now ‘an important national priority’. And third, the Bank won’t rely on forecasts as much. Before removing any stimulus, it wants to actually see unemployment declining and inflation heating up.

What’s the play this time?

Admittedly, not much has happened domestically since the latest meeting, so any major change in language is unlikely. The Bank will likely repeat that it’s prepared to do more, as the medium-term risks are still prevalent. For instance, the all-important JobKeeper program is set to expire in March, which may keep unemployment under stress next year.

That said, there is some scope for a slightly more optimistic tone. The two biggest developments since the RBA last met were 1) that the world will have multiple vaccines to combat the coronavirus soon and 2) that the Australian jobs market improved dramatically in October.

Granted, this is just a single month’s worth of data, but the vaccine news is truly game-changing as it eliminates most of the longer-term downside risks. It is probably too early for the RBA to remove its easing bias because of this, but policymakers could still sound more upbeat. If so, that would argue for a small spike higher in the aussie as speculation for even bigger QE doses fades.

Taking a technical look at aussie/dollar, a potential break above 0.7385 could open the door for the 0.7415 region.

In the big picture, 2021 is shaping out to be a solid year for the aussie. Vaccines will be rolled out – probably in the first half of the year – and the global environment could then stabilize, lifting demand for Australia’s commodity exports even further. Should all of this weaken the US dollar as well, then aussie/dollar might still have some miles left in the tank.

The main downside risk is the deteriorating Australia-China relationship. China just slapped aggressive tariffs on Australian wine, the latest in a series of trade hostilities. Relations between Australia and China have deteriorated sharply in recent months over issues such as the coronavirus pandemic, Hong-Kong, investment barriers and espionage. The aussie hasn’t responded much yet, but this is something to keep an eye on. One third of all Australian exports go to China, so the aussie might not stay immune for long if this brawl intensifies.

In case of a pullback, initial support in aussie/dollar may come from the 0.7330 zone, where a break would turn the focus to 0.7260.

Finally, Australia’s third-quarter GDP will be released one day after the RBA meeting, though markets will likely see this data as outdated.