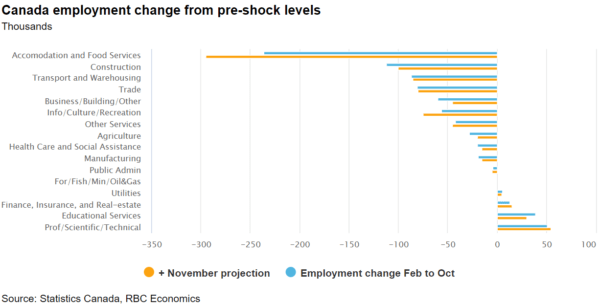 Optimism about the effectiveness of COVID-19 vaccines has brightened the outlook for the economy in 2021. This is true even as escalating virus case counts and the re-imposition of containment measures take their toll on Canadian’s health and the economy in the final days of 2020. The second wave of restrictions have been less widespread with restaurants, hotels, gyms, and banquet halls (along with nonessential retail in the Toronto Area) most significantly impacted. But their sting will be evident in November’s labour report, which will likely show a decline in employment for the first time in 9 months led by a sharp pullback in accommodation & food services. We expect job losses to total 50k and for the unemployment rate to tick higher to 9.1%.

Next week’s September GDP report should cap what proved to be a much better third quarter in Canada. Statistics Canada’s preliminary estimate already suggested output rose 0.7% in September, implying annualized GDP growth of a stunning 48% for the third quarter. More than three-quarters of the GDP decline in the spring had been recouped by September, and we expect any preliminary estimate for October’s output will also be modestly positive, given an earlier-reported increase in hours worked. But, the resurgence in the virus and lockdown measures are again taking their toll and we are tracking a sizeable 1%+ pull-back in November. That would still be small in comparison to the 18% GDP drop over March and April, but very large by any other historical comparison.

A heavy dose of fiscal support will still be needed until a vaccine can be distributed – and on that front, Monday’s federal fall fiscal update will be closely watched. Larger-than-normal household income supports for those losing work due to COVID-19 are already set to be carried well into next year in the form of expanded EI payments and the CRB program for self-employed people. Supports for businesses being effectively shut down by containment measures have been smaller than for households, but more targeted supports are expected, and the already-announced new commercial rent program and earlier extension of the CEWS (wage subsidy) will be helpful for companies until the vaccine and an economic recovery are secured. 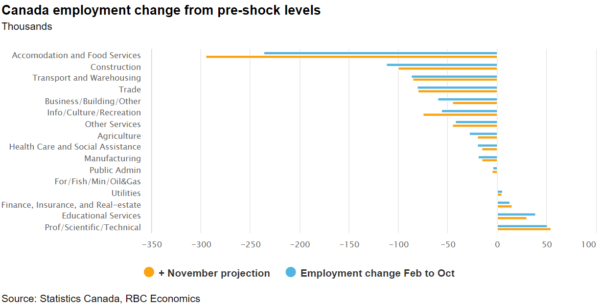 The Canadian trade deficit is expected to narrow to $2.1 billion in October, with exports expected to continue to rise and imports holding steady after a faster rebound to-date.
US payroll employment growth looks set to slow to 375k in November although a drop in jobless benefits claims sets up for the unemployment rate to decline to 6.5%. 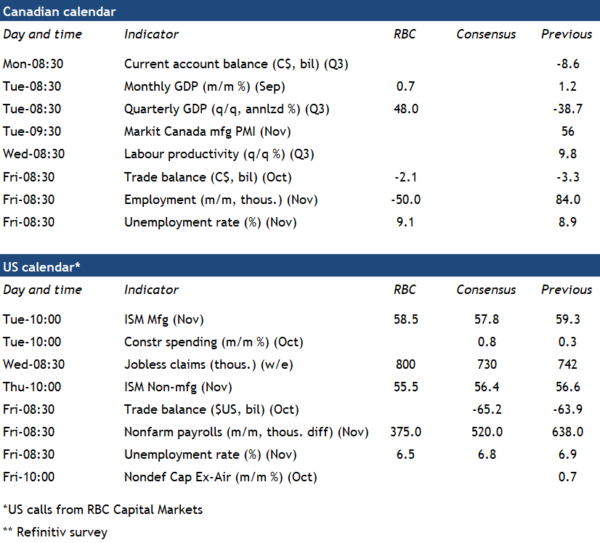