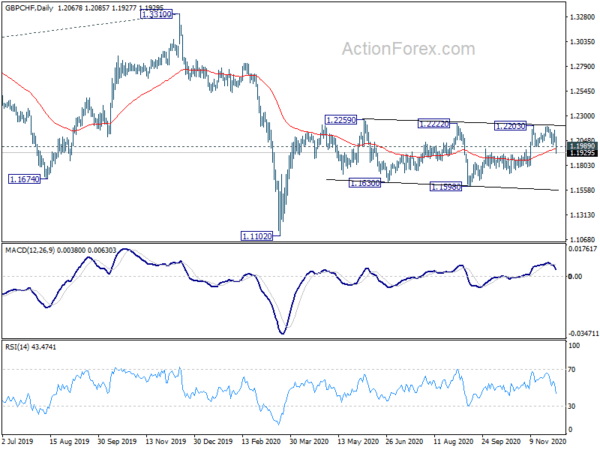 Selloff in Sterling is the main theme for today. UK become the first country to approve Pfizer-BioNTech coronavirus vaccine and shots are due next week. But the good news was overshadowed by Brexit uncertainties. As the negotiation deadline looms it’s reported that EU is insisting not rushing to a bad deal. Indeed, it’s also said that France and some other hardline EU countries are pushing for a no-deal if the UK doesn’t concede on the ever remaining issues.

For now, the markets are relatively mixed elsewhere, with Aussie pressured by escalating tension with China. Yen is also soft on general investor optimism. Swiss Franc, however, is the strongest one, probably benefited from Brexit uncertainties. Euro is the next strongest, probably for the same reason.

Technically, GBP/CHF’s break of 1.1989 support confirms that sideway pattern from 1.2559 has started another falling leg, back towards 1.1598 support. USD/CHF breaks through 0.8982 to resume medium term down trend. Question is on whether EUR/CHF will break through 1.0790 support to confirm short term topping. 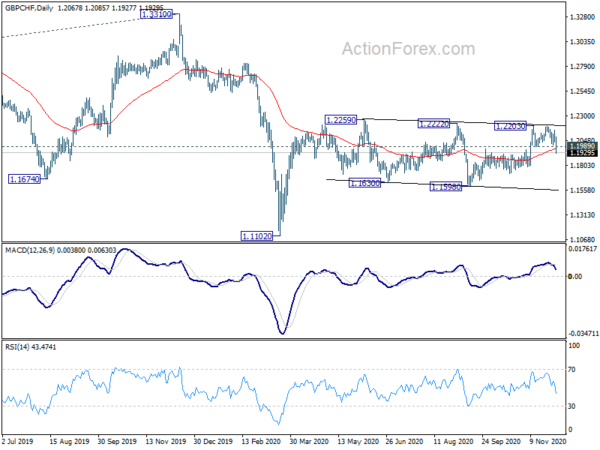 Eurozone unemployment dropped to 8.4% in Oct EU unchanged at 7.6%

Eurozone unemployment rate dropped to 8.4% in October, down from 8.5%, matched expectations. There were 13.825m unemployed in Eurozone, down -86k for the month.

EU unemployment rate was unchanged at 7.6% in October, 16.236m were unemployment, down -91k comparing to September.

Eurozone PPI came in at 0.4% mom, -2.0% yoy in October, versus expectation of 0.1% mom, -2.3% yoy. Industrial producer prices increased by 1.4% mom in the energy sector and by 0.1% mom for intermediate goods, capital goods and non-durable consumer goods, while prices remained stable for durable consumer goods. Prices in total industry excluding energy increased by 0.1% mom.

Australia GDP grew 3.3% qoq in Q3, technically out of recession

Head of National Accounts at the ABS, Michael Smedes said: “Following the record 7.0 per cent decline in the June quarter, Australia experienced a partial recovery in the September quarter. As a result, economic activity fell 3.8 per cent through the year to September quarter.”

Treasurer Josh Frydenberg said, “facing a once-in-a-century pandemic that has caused the greatest economic shock since the Great Depression, Australia has performed better on the health and economic fronts than nearly any other country in the world.”

In the remarks to a House committee, RBA Governor Philip Lowe said Australia has “now turned the corner” after an extremely difficult year, and economy recovery is “underway”. “The economic news has, on balance, been better than we were expecting. RBA is expected GDP growth to be “solidly positive” in both Q3 and Q4, followed by 5% growth over 2021 and 4% over 2022.

“Recent medical breakthroughs give us some hope that things will work out better than this,” Lowe added. ” If so, confidence would lift and there would be a further easing of restrictions. The result would be an upside surprise to growth and jobs, especially given the significant policy stimulus that is already in place, the generally strong balance sheets and the substantial government incentives for businesses to employ people and invest.”

On monetary policy, Lowe said the movement in market prices in response to the package announced in November was “broadly as we expected”. The board will “continue