After the Vaccine Boost, What’s Next for the Commodity Dollars? 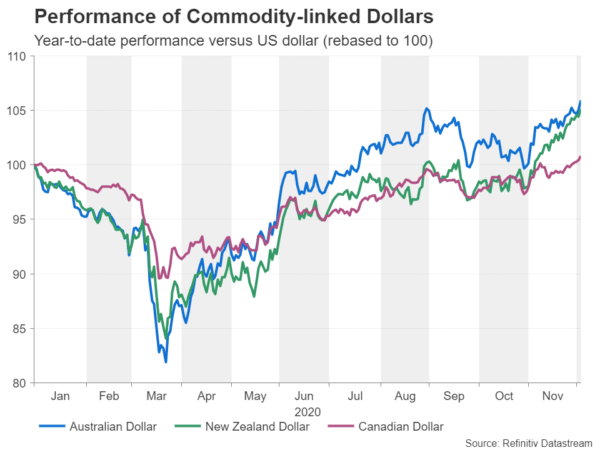 It’s been a roller-coaster year for the commodity-linked dollars of Canada, Australia and New Zealand as the global pandemic has wreaked havoc on international trade and on commodity prices – the lifelines of the three economies. But as countries around the world make progress towards recovering from the once-in-a-generation crisis, Australia and New Zealand seem poised to bounce back the quickest. Canada’s recovery may be slightly shakier due to its over dependency on the United States and oil exports. But overall, the three currencies have similar fundamentals driving them higher, although their paths may diverge somewhat over the coming year.

Having already started the year on a trade war-induced downtrend, the aussie, kiwi and loonie took a deep dive at the height of the Covid-19 market turmoil in March. But since then, they’ve been on a steady path upwards. The aussie is up about 6% in the year-to-date against the US dollar, the kiwi is up nearly 5%, and some way behind is the loonie, which has gained just over 1%. 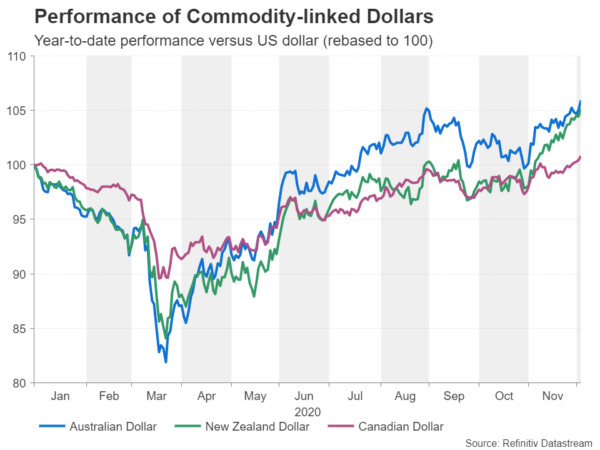 Strikingly, their rallies have been shaped by three phases. The first boost was in late March from the coordinated fiscal and monetary response globally. Then it was the worldwide easing of the lockdown restrictions in early June that gave rise to hopes of a V-shaped recovery. The latest bout of euphoria was sparked from the vaccine breakthrough in November that shone light at the end of the pandemic tunnel.

However, most of the positive news about a vaccine as well as expectations for additional monetary and fiscal stimulus have been more or less priced in by now. So how much further can the risk rally run?

It’s all looking up Down Under

For the Australian dollar, there’s plenty that could push the currency well beyond current peaks. Australia trades heavily with Asia, where the recovery is gathering pace and is less influenced by the spiralling virus cases in Europe and America, which are seeing their rebounds lose steam. Having effectively gotten its second wave under control early on, Australia is now able to loosen many of its restrictions.

Moreover, metal and ore prices, such as those of iron ore, coal and copper, are soaring, boosting the country’s terms of trade. Resources comprise the bulk of Australia’s exports, which, incidentally, are primarily destined for Asia.

However, even with the demise of the Trump administration, the trade outlook is not risk-free. Relations between Beijing and Canberra have soured very significantly in recent months to the extent that China has imposed hefty tariffs on Australian wine, barley and beef. So far, China has steered clear from slapping duties on resources imports, which are crucial for its domestic industries, and so the economic impact on Australia has been minimal. But tensions may flare up further in 2021 if US President-elect Joe Biden decides to form an anti-China alliance and Australia opts in. If China’s tariffs spread to Australia’s mining exports, the market reaction would almost definitely not be as benign as it’s been to date.

But a bigger threat to the aussie’s uptrend is the Reserve Bank of Australia. At its November meeting, the RBA extended its quantitative easing (QE) programme by allocating A$100 billion to specifically target 5- to 10-year government bonds, having previously targeted only 3-year bonds. Whilst the aggressive expansion of QE was in response to the bumpy recovery, many see the move as indirect currency intervention. The RBA appears to be unofficially capping the 10-year yield at around 1% and this may pose a growing challenge for the aussie’s advances going forward, especially if the US 10-year Treasury yield were to overtake it. 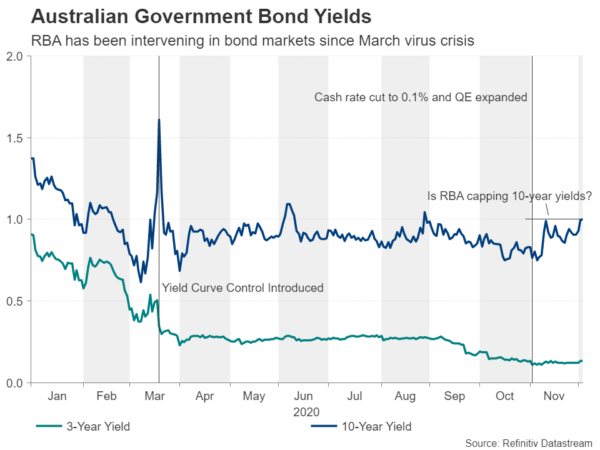 Negative rates priced out for RBNZ

Not to be outdone, the Reserve Bank of New Zealand is engaged in aggressive QE of its own. However, at its last meeting, the RBNZ climbe