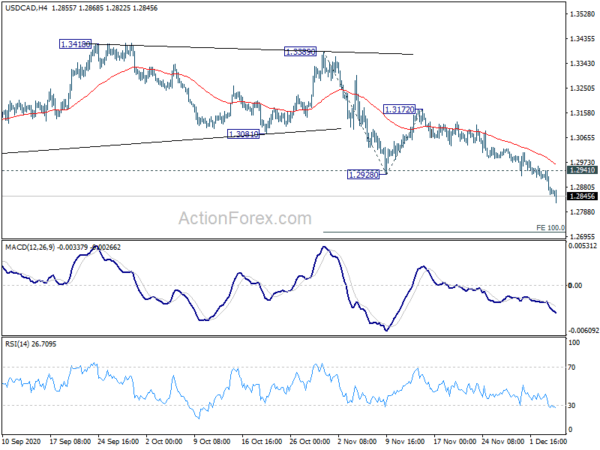 Canadian Dollar is given another boost in early US session after stronger than expected job data. In the background, the Loonie has already risen following higher oil prices. Dollar, on the other hand, has little reaction to much worse than expected non-farm payroll report. For the week, Dollar and Yen remain the worst performing one. Swiss Franc and Euro are the strongest, followed by Canadian.

Trade deficit widened slightly to USD -63.1B in October, versus expectation of USD -64.7B.

Trade deficit widened to CAD -3.76B in October, larger than expectation of CAD -3.2B.

Michael Saunders talked about “Some Monetary Policy Options – If More Support Is Needed” in a speech. He said, “My judgment at present is that the ELB (effective lower bound) for the UK is probably a little below zero, provided appropriate mitigations (eg reserve tiering, bank funding scheme) are in place”. Though, there is “considerable uncertainty over its exact level”, which has several implications.

UK PMI Construction rose to 54.7 in November, up from 53.1, well above expectation of 52.3. Markit noted that house building remained the best-performing category. New order growth was highest for just over six years. But stretched supply chains led to rising costs.

Intraday bias in USD/CAD remains on the downside at this point. Current down trend should target 100% projection of 1.3389 to 1.2928 from 1.3172 at 1.2711 next. On the upside, above 1.2941 minor resistance will turn intraday bias neutral and bring consolidations first, before staging another fall. 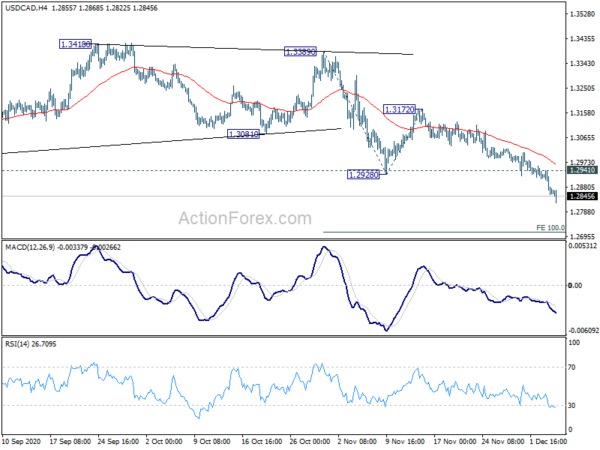 In the bigger picture, fall from 1.4667 is seen as the third leg of the corrective pattern from 1.4689 (2016 high). Rejection by 55 week EMA is keeping outlook bearish. Such decline should now target 1.2061 (2017 low). In any case, break of 1.3389 resistance is needed to indicate medium term bottoming. Otherwise, outlook will remain bearish in case of rebound.