The Weekly Bottom Line: December Calm Before the Storm 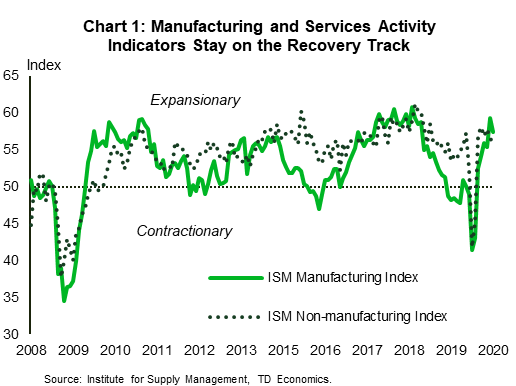 U.S. – December Calm Before the Storm

The first week of December brought a mixed bag of economic and financial data. On the financial front, the S&P 500 continued to defy gravity, setting a record high almost every day of the week despite soaring cases of coronavirus infections and related deaths. Markets looked past the near-term risks associated with the continued health crisis and focused on the positives. The “reopening trade” that started with positive vaccine news continued into the fourth week, while renewed hopes of an additional fiscal package added fuel to the fire. The likelihood of a deal before the end of the year improved this week, as news broke of a $908 billion compromise offered by a bipartisan group of Senators.

On the economic side, the data was rich this week. The Institute for Supply Management released November updates for its manufacturing and non-manufacturing purchasing managers indexes. Both indexes posted moderate declines but remained in expansionary territory, indicating a slowing but still positive pace of improvement (Chart 1). The slowdown in manufacturing was driven by new orders, production and inventories, while the employment sub-index moved back into contractionary territory just one month after posting an above-50 reading in October. Overall, the index remains at the high end of historical readings, suggesting that manufacturing demand remains strong for most sectors. The recovery in services, meanwhile, continued for the sixth month in a row despite increased restrictions across several states in November. Sectors sensitive to social distancing measures remain in contraction and are unlikely to get a recovery boost until more progress is achieved in defeating the pandemic.

On the employment front, the data was mixed. Last week’s jobless claims declined after a two-week consecutive increase. However, the reading may be overstated due to processing complications during the Thanksgiving holiday. To make matters worse, the weekly claims report came under scrutiny due to a GAO report noting “flawed estimates of the number of individuals receiving benefits.”

The November nonfarm payrolls report was more in tune with the epidemiological data. Employment rose by 245k – roughly half the amount that economists expected. Employment gains were particularly modest in the leisure and hospitality sector, which remains one of the most badly hit sectors of the economy (Chart 2). The unemployment rate fell to 6.7% from 6.9% but was marked with a sizeable decline in the labor force. The number of people not counted as unemployed but who want a job rose by almost 450 thousand to 7.1 million, 2.2 million more than in February 2020.

Moderate employment data provides more evidence of a bifurcated recovery, suggesting that more relief measures are required to support American households that are struggling in this pandemic. According to the most recent Household Pulse Survey 32% of families reported some difficulty paying for usual household expenses during the coronavirus pandemic. As the surge in infections is not expected to wane until at least early January, there is a strong case for additional fiscal supports. Fingers crossed the message appears to be getting through.

Canada’s economy bounced back soundly in the third quarter of this year, growing at an annualized rate of 40.5%. The lights were switched back on, but part of the factory is still dark. High contact services are still highly impaired, operating at about 70% of their pre-crisis level. As a result, the recovery is incomplete and as of September, real gross domestic product was still 4.2% below its pre-crisis level.

At the same time, other parts of the factory have been running extra shifts. Spurred on by low interest rates, households have pulled forward spending on durable goods and housing. These gains raised growth over the summer, but won’t be repeated and may even reverse in the months ahead.

The Canadian economy has done better on the employment front, regaining over 80% of the jobs lost in the initial lockdown phase. However, a soft underbelly was apparent in the jobs data in November. While 62k jobs were created in November and the unemployment rate fell 0.4 percentage points (Chart 1), there was a notable disparity in employment outcomes across industries and regions. Goods-producing industries accounted for over 70% of the jobs gained in the month. Services industries, meanwhile, were highly bifurcated. Decent gains occurred in sectors able to cope with the new operating environment (finance and real estate, professional services, and even wholesale and retail trade, and transportation and warehousing). On the other hand, industries directly impacted by restrictions, such as recreation and accommodation and food services, suffered steep losses.

Unfortunately, things are likely to get worse before they get better. With restrictions in Toronto and Peel region coming into effect after the survey reference week (November 8th through to 14th), and additional restrictions announced in western provinces in recent w