Week Ahead: Holidays Could Lead to Slow, but Volatile, Markets 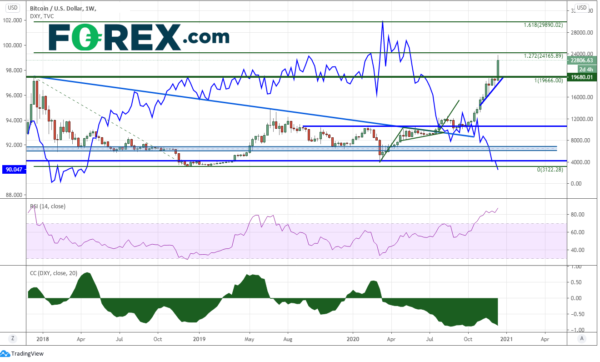 The end of year holidays arrive this week and that means slow, light trading, unless of course, there is a Brexit trade deal or a US Stimulus agreement.  If one, or both, of these issues are resolved within the next two weeks, markets could be in for a hectic ride.  Positive and negative comments by both sides regarding Brexit are tossed into the press daily, as both sides can all agree that they are “almost there” yet “still far apart”.  In the US, both Democrats and Republicans seem to want to go home for the holidays, and a Covid stimulus package seems imminent.  On Friday, Republican House leader McConnell went as far as to say the rescue package is “very close at hand”.  Economic data will be light this week as well.

With Christmas Eve on Thursday and Christmas Day on Friday this week, many traders will be “out of the office” (ie not trading from home because offices are closed this year) this week.  In addition, because the next week is year end, many traders are already done trading for the year!   For the markets, that means slow and quiet markets,  usually with current trends slowly continuing into the end of year.  However, when there is an event that can cause some major volatility (even during a normal trading time of the year), markets can really move!

Consider a case where a Brexit deal is agreed and signed over the next 2 weeks.  Many market participants may have already been done for the year because of headline risk from this event alone. Why risk a whole year on the outcome of one event?  Add in “end of year”, when most large shops close the books in mid-December.  Then throw in a few holidays and a pandemic.  It’s a recipe for a volatility! Boris Johnson said on Friday that , for the most part, the final issue holding up a trade deal is that of fisheries. He said the EU’s position is “simply not reasonable”.  The EU said on Friday that “big difficulties remain, in particular in fisheries.”  EU lead negotiator Barnier warned of a “narrow path” to a deal.  Deadline after deadline has been passed, yet negotiation continue.  If a deal is reached, watch for a strong risk-on move.  However, if no progress is made, be weary of significant downsides to risk, especially in GBP pairs.

An additional issue, though not quite as pressing as Brexit, is that of a US emergency stimulus deal.  With Joe Biden as President-elect, many feel that an aid package is on its way.  It’s more a question of “how much” rather than “when”.  Technically, a deal needs to be done by midnight on Friday (December 18th) due to an impending government shutdown.  However, no one seems too worried as members of congress said they will continue to work around the clock until a deal is reached.  The current package being negotiated is worth nearly $900 billion and will provide an extra $300 of jobless benefits per week and additional $600 stimulus checks.  However, Joe Biden has already stated that this will be the beginning of stimulus.  Once he becomes President, there is more to come.

Which leads to the next important date to watch, January 5th, 2021.  This is date for the run-off for two Senate seats in Georgia.  Republicans currently hold a slim majority of 50-48 in the Senate, with two open seats.  Democrats hopes are slim, however if they can take both of those seats, the Senate would be 50/50.  Any matters which would be tied, would be decided by the Vice President, Democrat Kamila Harris.  This would essentially give Democrats control of both the House of Representatives and the Senate.  Markets don’t seem to have priced this risk into the market, which could add to volatility as the New Year opens on January 4th!

Coronavirus vaccines are being approved around the global as Pfizer and Moderna began shipping millions of doses.  Front line workers and elderly in nursing homes are first in line to receive the new vaccines. However, it’s expected the vaccines wont be available to the general public until the end of Q1 2021.  That could be a problem for many countries which are currently on lockdown or severe restrictions. Recent economic data from Europe has been mixed but generally better than expected, while recent US data has been just poor.  Last week, the Fed and BOE were on hold as they waited for fiscal drama to play out. The BOJ remained on hold as well.

Economic data will be light this week.  Some of the major economic data releases are as follows:

Chart of the Week: Weekly BTC vs DXY