The Weekly Bottom Line: A Turbulent Start To A Hopeful Year 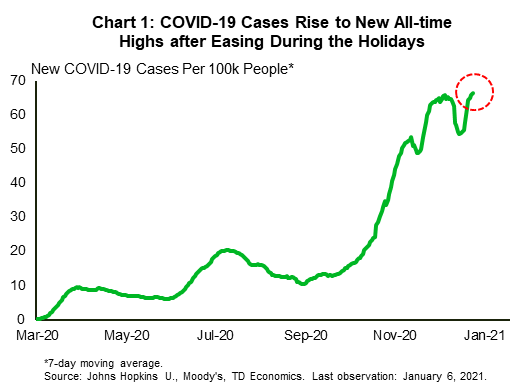 U.S. – A Turbulent Start To A Hopeful Year

Along with personal resolutions, the New Year tends to usher in a sense of hope. But, as the last few days have demonstrated, simply flipping the calendar does not guarantee a fresh start. Many of the issues that made 2020 a challenging year linger on. The health crisis is (still) front and center, with positive cases and hospitalizations surging to all-time highs (Chart 1).

Meanwhile, the unprecedented events at the U.S. Capitol on Wednesday shocked the country and the world. Still, in terms of the economic outlook, the biggest development on the political front was that Democrats narrowly took control of the Senate by prevailing in both Georgia runoff elections. With all three levels of government now in the hands of Democrats, Joe Biden will have a better shot at implementing his agenda.

The Biden election platform promised an ambitious spending agenda, funded by higher taxes. A thin Senate majority will pose a challenge to several elements on the list, but increased spending to support the economy through the pandemic appears likely. Tax changes, such as the planned tax hikes on corporations and high-income individuals, appear less likely. While they can be rolled through in the budget reconciliation process with a simple majority, more conservative-leaning Democratic Senators would have to be on board, making it a harder sell than temporary supports to bridge the economy while vaccines continue to be rolled out.

Economic data was not all negative – vehicle sales ended 2020 on a solid footing and ISM indexes remained well in expansionary territory. However, after a solid seven-month run, job creation came to a halt in December, with payrolls falling by 140k (Chart 2). While plenty of industries still added jobs, including professional and business services, retail trade and construction, increased restrictions took a heavy toll on the leisure and hospitality industry (-498k), with the decline concentrated in bars and restaurants.

To surpass this latest pandemic-induced hurdle, the economy will need all the help it can get. The $900 billion relief bill that was passed in late December, which extends special emergency unemployment benefits for 11 weeks through to mid-March and provides $600 stimulus checks to both adults and qualifying children, will go a long way to supporting the economy in the near-term as restrictions keep many businesses shuttered. More help is likely on the way, with the new administration having pledged to boost the size of the stimulus checks to $2,000, among other things.

Overall, the combination of vaccinations and increased spending, suggests that 2021 should be a much better year than the one we left behind. Markets certainly seem to be in tune with this view, with risk assets shrugging off this week’s turmoil in the Capitol. That said, we are not out of the woods yet and there could be additional bumps along the road. New COVID-19 variants, which appear to spread more easily, pose an added downside risk. The new administration certainly has its work cut out for it.

Financial markets couldn’t have asked for a better start to the new year. The S&P/TSX Composite gained 3.5% on the week (as of writing) hitting a record high on the back of gains in the energy sector. The index has been buoyed by hopes for an extended U.S. stimulus package after Democrats took control of the Senate south of the border. Elsewhere, oil markets shrugged off the turmoil in Washington and rallied to an 11-month high amid Saudi Arabia’s pledge to cut production by more than expected. As of writing, oil prices stand at $51.5, more than 6% higher compared to last week.

On the pandemic front, Canada – one of the first countries to authorize vaccines – has seen its vaccine rollout lag its peers (Chart 1). So far, only three provinces (Alberta, British Columbia and Quebec) have administered more than 50% of the doses delivered to them. The slower-than-expected rollout is due to several reasons, including insufficient supplies; clinic closures on statutory holidays; provinces hamstrung by a shortage of health care workers; and some provinces holding the second of the two doses in reserve in case of supply disruptions. If the vaccination process is not sped up, it is unlikely the country will meet the target set by the Prime Minister of immunizing more than half of all Canadians by September 2021.

To add fuel to the fire, the sluggish rollout is taking place at a time when new infections have hit a record high and more contagious mutations of the virus are spreading. The death rate is also climbing, though it remains lower than May of last year. The rising caseloads and hospitalizations have prompted provinces to extend and tighten restrictions. British Columbia extended its ban on social gatherings until next month; Quebec announced a four-week night time curfew; Ontario – which had its deadliest week – is also considering a curfew to curb the spread of the virus.

In terms of economic data, the labour market shed 63k jobs in December in the first monthly decline since April (Chart 2). The unemployment rate edged up to 8.6% on the month as the labour force declined by 42k and the participation rates dropped to 64.9% (65.1% in November). Jobs were shed across most provinces and were concentrated in the service sector, where employment fell by 74k. The service sector is once again bearing the brunt of tougher restrictions on the back of surging cases.

Meanwhile, Canada’s trade deficit narrowed to $3.3 billion in November, down from $3.7 billion in October. Exports were up 0.5% (m/m), while imports fell 0.3% on the month. The increase in exports came from four of the 11 product categories led by metal and minerals, which benefited from rising prices, strong foreign demand and supply bottlenecks in other countries. Meanwhile, imports fell in seven of the 11 product categories, including machinery and energy. While the increase in export volumes provides some respite, tighter restrictions in several provinces and Canada’s trading partners throughout much of December will keep the near-term trade outlook fragile.

Oil prices have bounced, and the gasoline component of the CPI likely rose sharply in December, but we expect another weak reading for the trend-setting core series. The rise in the core index was probably held down by a decline in used vehicle prices and minimal gains once again in the rental components. We continue to view COVID as disinflationary, on balance. Our forecast implies 1.3%/1.6% y/y for total/core prices, little changed from 1.2%/1.6% y/y in November and down from 2.3%/2.4% y/y in February (pre-COVID).

Retail sales probably fell for a third straight month in December. The auto and gasoline components likely rose, but spending at bars and restaurants probably plunged, due to COVID restrictions. The control series probably fell sharply as well, with holiday spending up less than allowed for by the seasonal factors. That said, we estimate total sales were up by around 3.2% y/y. The y/y gain was as high as 6.1% in September.

The Bank of Canada’s Business Outlook Survey (BOS) and Survey of Consumer Expectations (CSCE) should take on added importance given elevated uncertainty around the second wave of COVID-19 and near term outlook after a display of solid momentum into Q4. The consultation period for the BOS aligns with a sharp increase in COVID infections from mid-November into early December that should weigh on future sales and result in a more downbeat tone than the previous survey, although the BoC may also look at measures of capacity (ability to meet unexpected demand, labour shortages) for insight into potential output. Looking past the BOS, the CSCE will provide an update on consumer inflation expectations along with expectations for household consumption and the housing market. The latter may shine light on the extent of pent-up demand remaining for Canadian consumers, while house price expectations will be monitored for signs of speculation with benchmark prices running at 11.5% y/y through November.