The USD tended to gain against most of its counterparts yesterday as yields tended to rise fuelled by market expectations for President-elect Joe Biden’s plans for a massive fiscal stimulus. Biden is to provide details about his plan for trillions of dollars for a pandemic relief package on Thursday and expectations are that more stimulus could lead to faster growth probably lifting US yields thus strengthening the greenback. It should be noted though that the USD strengthening may prove to be short-lived given that as in a longer view perspective the higher US fiscal stimulus could also provide a boost in market sentiment thus creating some safe haven outflows for the greenback. On the political agenda, it should be noted that the House of Representatives voted to impeach US President Trump for a historic second time, yet the trial in the Senate may require some days to begin and its doubtfull whether it will gather the necessary votes to be successful.

Today during the American session, we note the release of the US weekly initial Jobless claims figure, yet the main interest of the market may be on Fed Chairman Powell’s speech later on. Markets are expected to focus on any further clues for the bank’s intentions on when it would start tapering its massive QE program and should there be indications for an earlier than expected tapering, we may see the USD gaining substantially.

EUR/USD dropped yesterday, breaking slightly below the 1.2155 (R1) support line, now turned to resistance. It should be noted that the pair seems to have stabilised in the Asian session, yet we tend to maintain a bias in favour of a bearish movement, given also that the RSI indicator below our 4-hour chart seems to be aiming for the reading of 30, underscoring the presence of the bears. Should the selling interest regain momentum, we may see the pair breaking the 1.2100 (S1) line aiming for lower grounds. Should buyers regain the initiative though we may see the pair breaking the 1.2155 (R1) line and aim if not break the 1.2215 (R2) level.

Oil prices dropped somewhat yesterday during the European session as the increase of coronavirus cases globally tended raise concerns regarding the demand for the commodity, though later on a drawdown in U.S. crude stocks for another week and robust oil import data from China stabilised WTI prices. One of the largest consumers of oil worldwide, China, seems to have maintain a high number of new daily Covid 19 cases as its reported that infections in north-eastern Heilongjiang province nearly tripled. As reported by Reuters, China’s total crude oil imports surged 7.3% in 2020 despite the adverse effect of Covid 19 early in the year, with imports rising substantially in the second and third quarters as shown by customs data. European government tended to tighten and prolong the lockdown measures in recent days with some analysts citing the new fast spreading variant of Covid 19 and vaccinations expected to start having an effect in two or three months. Should worries for the rise of Covid 19 cases intensify we may see oil prices weakening further and vice versa.

WTI prices dropped yesterday and stabilised between the 54.20 (R1) resistance line and the 51.60 (S1) support line. As the commodity’s prices broke the upward trendline incepted since the 5th of the month we temporarily switch out bullish outlook in favour of a sideways movement, until the market decides the direction of the commodity’s prices next leg, with the bulls having an advantage as the RSI indicator below our 4-hour chart seems to remain above the reading of 50. Should the bulls actually maintain control over WTI’s prices, we could see it aiming if not breaking the 54.20 (R1) resistance line. Should the bears take over we may see WTI prices breaking the 51.60 (S1) line aiming for lower grounds.

Today we note the release of Germany’s full year GDP rate for 2020 and the US weekly initial jobless claims figure, while besides Fed Chair Powell Atlanta Fed President Bostic and Dallas Fed President Kaplan are also scheduled to speak. 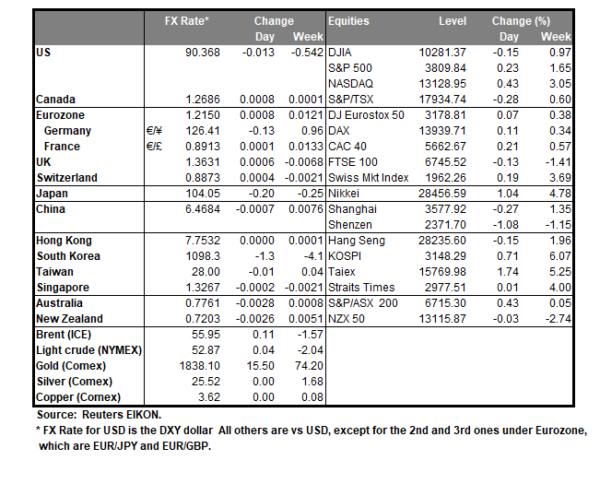 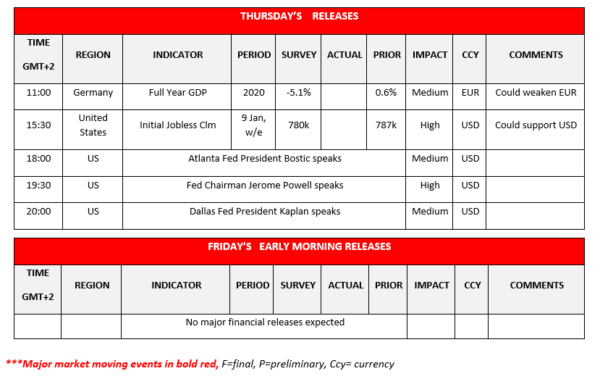