Week Ahead – Fed Meeting, Barrage of Data, and Tech Earnings 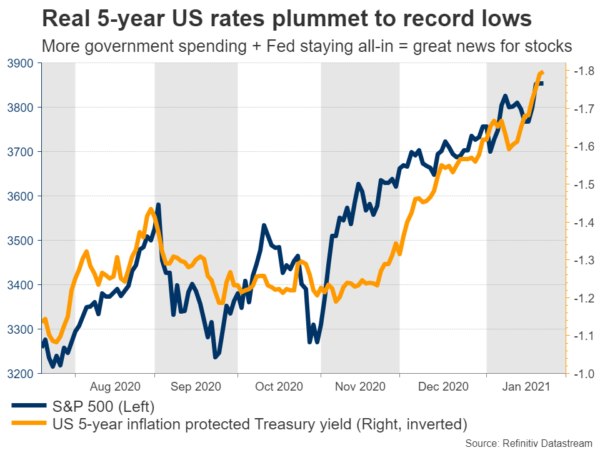 With President Biden now in office, markets will be on alert for any remarks from US Senators about whether they’d support the massive stimulus bill he proposed. A tough negotiating battle could see the final proposal being watered down. The Federal Reserve will meet as well. No policy changes are on the menu, so Chairman Powell is likely to reaffirm that it’s too early to discuss tapering. There’s also a blitz of economic data, including fourth-quarter GDP from America and Germany, while most of the tech complex will report earnings.

Biden’s inauguration week was quite the party for global markets. Stocks cruised to new record highs, with tech heavyweights spearheading the charge, while the defensive dollar retreated amid the cheerful mood. With expectations for a massive spending package riding high and the Fed chief reaffirming that his central bank will keep its foot on the QE gas, real Treasury yields are back on the decline.

Markets are looking ahead to a period where growth and inflation begin to accelerate, but the Fed holds rates on the floor, keeping real rates deeply negative. In turn, negative real rates are a blessing for most assets, especially stocks and gold. If bonds are negative-yielding assets, anything that offers positive returns is suddenly attractive.

Can the euphoria continue? Most likely. America is about to go on a federal spending spree, vaccines are being rolled out, central banks are all-in, and the Biden administration will probably unleash even more spending if the recovery hits any speed bumps. That’s a radiant environment for US stocks, and ultimately for the dollar as well.

The Fed doesn’t even want to discuss QE tapering this early, but by the middle of the year, it could be a different story. Vice Chairman Clarida kept the door open for tapering to begin in early 2022, and markets could begin pricing this in much sooner. Meanwhile, Europe is still in a harsh lockdown, is far behind America in the vaccination race, its economy will suffer a double-dip recession, and there isn’t any impressive stimulus in the pipeline either. If the ECB ever normalizes, it will be years after the Fed. 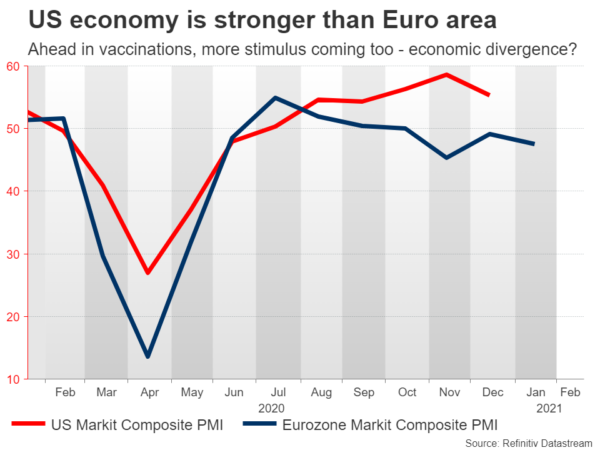 Hence, the longer-term risks surrounding euro/dollar seem tilted to the downside. But that’s the bigger narrative. For now, other elements might drive the price action. Will Biden manage to push a $1.9 trillion package through Congress, or will the proposal be watered down towards $1 trillion to gain Republican support? Any remarks from the various Senators in the coming days will be crucial.

Fed meets, Powell to push back on QE tapering

The main event will be the Fed meeting on Wednesday. There isn’t any scope for policy changes, and since this is one of the smaller meetings without new economic forecasts, any market reaction will come down to Chairman Powell’s comments.

The Fed has been calling for more government spending for a while, so Powell will probably be thrilled with the recent developments. But he can’t appear too happy. He and other senior Fed officials have recently pushed back on the idea that a stronger economic outlook implies the Fed may begin to decrease its QE dose soon, and he will likely reaffirm that message. 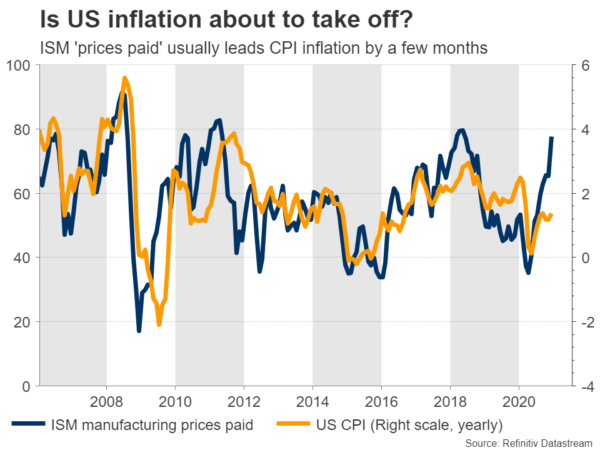 A promise that the Fed will remain ultra-aggressive throughout 2021 would argue for a retreat in the dollar and another push higher in equities, but any such reactions are likely to be minor as investors know this much already. Instead, the main variable might be how the Congressional stimulus battle goes.

There’s also a deluge of data. Durable goods for December will be released a few hours before the Fed decision, while the first estimate of GDP for Q4 is out Thursday. Forecasts point to an annualized increase of 4.4%, while the Atlanta Fed GDPNow model suggests a 7.4% print, so there might be scope for a positive surprise. Then on Friday, personal income and consumption data, alongside the core PCE price index for December will hit the markets.

Over in Europe, the highlight will be Germany’s GDP for Q4 on Friday. Amid an ongoing lockdown, the economy probably contracted again in the final quarter, something endorsed by the Markit PMI survey for December. And the prospects for Q1 don’t look bright either, considering that the nation’s lockdown will continue until mid-February.

A negative print could reinforce the narrative of economic divergence between Europe and America, especially since most Eurozone economies will probably fare even worse than Germany, which unleashed powerful fiscal stimulus and had slightly more ‘relaxed’ shutdown rules. The nation’s Ifo business survey for January will also be released Monday, ahead of monthly inflation data on Thursday. 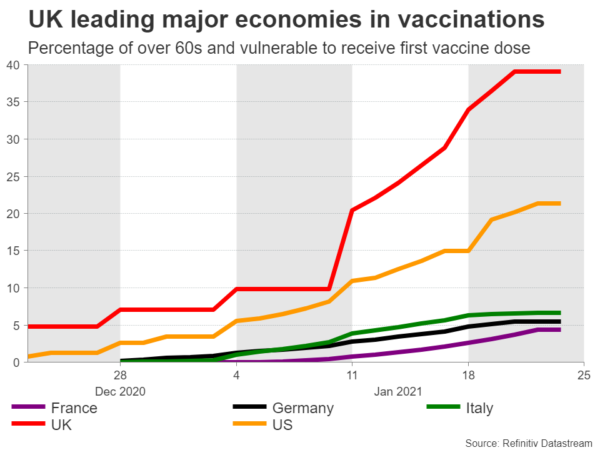 Staying in Europe, Britain’s jobs report for November is due on Tuesday. It captures the period when lockdown rules were tightened, so chances for a setback seem high. However, the markets will probably view this as old news. Any reaction in the pound is unlikely.

Instead, sterling’s fortunes lie with the vaccination campaign. Investors have gotten excited lately as Britain is leading the G10 pack in the vaccination race, sparking hopes that it may be the first major economy to defeat the virus completely. If this robust pace of immunization is maintained, better days might lie ahead for the pound, which is already trading near multi-month highs.

The key downside risk is a potential corporate tax increase in the UK’s March budget. Raising taxes in the middle of a crisis would be disastrous, so the Treasury is unlikely to push ahead with this, but it is still something to watch.

In the commodity FX spectrum, Australia’s inflation stats for Q4 are out on Wednesday, ahead of Canada’s monthly GDP print for November on Friday. With neither the RBA nor the BoC expected to make any policy moves, the fate of both currencies lies mostly with global risk sentiment and commodity prices.

Finally, the earnings season fires up with Apple, Microsoft, Facebook, Tesla, and many others releasing their quarterly results. These giants have massive weights in indices like the S&P 500, so their results could influence not just their own stocks, but the broader market as well. And since the dollar tends to move in the opposite direction of equities nowadays, the aftershocks could be felt in FX too.