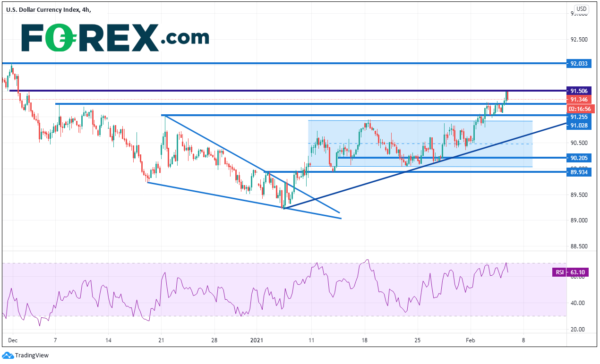 The DXY has been on a tear lately, moving from 90.00 to 91.50 since January 22nd.  Today alone the US Dollar index moved from 91.09 up to 91.485.  The DXY hit resistance just as the BOE announced it was leaving rates unchanged and didn’t intend to signal that they were going to raise rates in the future.  As a result, GBP screamed higher.  The DXY took the brunt of the GBP move and pulled back.  Intraday support is now at 91.24 and 90.98.  Bulls will be looking to fade the pullback in DXY and buy near these levels. Strong horizontal resistance is above at the day’s’ highs of 91.485. Conversely, Gold (XAU/USD) has been moving lower since the beginning of the year.  Gold and the DXY typically move inversely to each other.  Today was no exception.  As DXY moved higher, gold moved lower and is currently testing near-term trendline support at 1808.  The next level of support is 1802.69, the lows of January 17th and the 1800 psychological round number.   Resistance isn’t until 1830.  If price does bounce intraday, expect Gold bears to be selling near those levels.   Gold bulls will be buying near the confluence of support between 1800 and 1810.  Note that on a 240-minute timeframe, the RSI is oversold , which may indicate the precious metal is ready for a bounce.