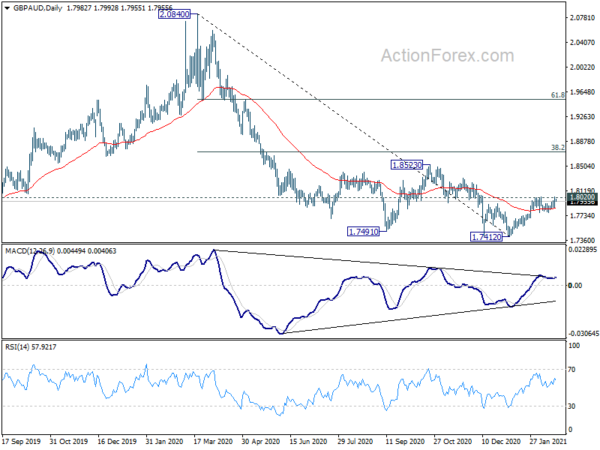 Sterling continues to trade as the strongest one for the week, as focus turns to UK retail sales and PMIs. Upside surprises there could give the Pound another lift. Australian Dollar is keeping itself close as second strongest for now. On the other hand, Yen and Swiss France are staying as the weakest, followed by Euro. Dollar and Canadian Dollar are both mixed.

BoJ is set to review its monetary policy tools in March, to make the massive stimulus program “more sustainable and effective”. It’s reported that the central bank could replace some numerical guidelines for ETF purchases. A source to Reuters noted that “to make the BOJ’s policy sustainable, it needs to avoid buying too much ETFs when doing so is unnecessary”.

Japan PMI manufacturing rose to 50.6, but services dropped to 45.8

Andrew Harker, Economics Director at IHS Markit, said: “A key positive from the flash PMI data for Australia is the strongest pace of job creation since late-2018…. On a less positive note, growth in the economy has been accompanied by stronger inflationary pressures… Another factor potentially putting the brakes on growth, particularly in the manufacturing sector, is the ongoing disruption to supply chains amid global shipping problems which showed no sign of letting up.”

Ben James, Director of Quarterly Economy Wide Surveys, said: “There continues to be variations in retail sales between states and territories, as COVID-19 restrictions are tightened or eased in different parts of the country.”

GBP/JPY’s rally resumes after brief retreat and intraday bias is back on the upside. Sustained break of 147.95 structural resistance will carry larger bullish implications. Up trend from 123.94 should then target 100% projection of 123.94 to 142.71 from 133.03 at 151.80 next. On the downside, though, break of 146.39 minor support will indicate short term topping, and turn bias to the downside for pull back.