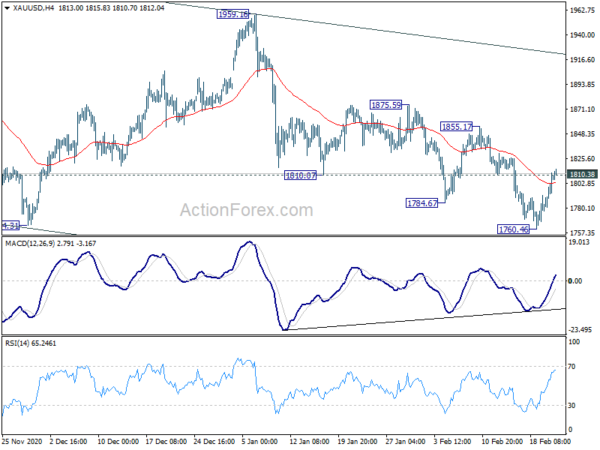 Dollar stays generally soft in Asian session today as markets await Fed Chair Jerome Powell’s testimony. The topics of inflation and surging treasury yields would be the focuses. For the former, Powell would likely talk down the significance of temporary rise in inflation, and focus on medium term outlook and expectations. Though, yields would be a more tricky one. Fed would, on the one hand, be happy seeing treasury markets moving “back to normal”. Yet, Powell would hope to refrain from hinting on even considering stimulus exit. The balance is not easy or him to strike.

Technically, EUR/USD’s break of 1.2168 minor resistance suggests resumption of rebound from 1.1951 for 1.2348 high. USD/JPY’s breach of near term channel support is an early sign of near term bearish reversal. Both are hinting on some downside risks for Dollar. Gold’s break of 1810.38 minor resistance also argues that it has bottomed at 1760.46, after breaching 1764.31. Strong rebound in Gold towards 1855.17 resistance could reaffirm Dollar weakness elsewhere.

In a speech, ECB President Christine Lagarde said the central bank’s commitment to preserve favorable financing condition to support all sectors of the economy implies “looking at indicators along the whole transmission chain of our monetary policy – from risk-free rates to government borrowing costs to capital markets to bank lending for firms and households.”

“Within the broad-based set of indicators that we monitor to assess whether financing conditions are still favourable, risk-free overnight indexed swap (OIS) rates and sovereign yields are particularly important”. Accordingly, she added, “the ECB is closely monitoring the evolution of longer-term nominal bond yields.”

“We are watching long rates closely as it is an important element of favorable financial conditions,” he told BFM Business TV. “Financing conditions remain very favorable — France is financing itself for 10 years at -0.1% tonight — but we will ensure they remain favorable.”

Villeroy also said that there is no risk of overheating in the Eurozone economy. Also, there’s no risk of a lasting pick up of inflation.

BoE Vlieghe: Interest rate may not go back to 4-5% level in my lifetime

BoE MPC member Gertjan Vlieghe said yesterday, 1970s and 1980xs were the “unusual decades” when “interest rates were unusually high then”. Asked if interest rates might return to the levels of 4-5% before the financial crisis, he said “maybe not in my lifetime”.

“It doesn’t mean that interest rates don’t go up from current levels. It just means that when they go up, they don’t go back to 4 or 5%”, he added.

“The decline in metalliferous ores was driven by a decline in the quantity of iron ore exported in January. Despite the decline, exports of Metalliferous ores are the second highest on record behind December 2020,” Head of International Statistics at the ABS, Andrew Tomadini said. “A drop in global car manufacturing is leading to supply shortages, with the imports of road vehicles from Japan and Thailand, Australia’s two largest road vehicle source countries, driving the decline in January imports”.

WTI oil resumes recent up trend after brief consolidation and hits as high as 62.70 so far in Asian session. It’s believed that restoration of US oil production after the deep freeze in Texas could take longer than expected. With possible pipeline freeze and work on examination oil infrastructure, resumption in output could take more than just days.

Near term outlook in WTI will now stay bullish as long as 58.57 support holds. Next target is 65.43 key long term structure resistance.

UK employment, Swiss PPI and Eurozone CPI will be released in European session. US consumer confidence, and house price indices will be featured later in the day. But major focus will be on Fed Chair Jerome Powell’s testimony.

EUR/USD’s break of 1.2168 resistance suggests that that rebound form 1.1951 is resuming. Intraday bias is back on the upside for 1.2188 resistance first. Firm break there should confirm completion of the correction from 1.2348, and bring retest on this high. On the downside, though, break of 1.2090 minor support will turn bias neutral again. Further break of 1.1951 will extend the correction from 1.2348 with another fall.