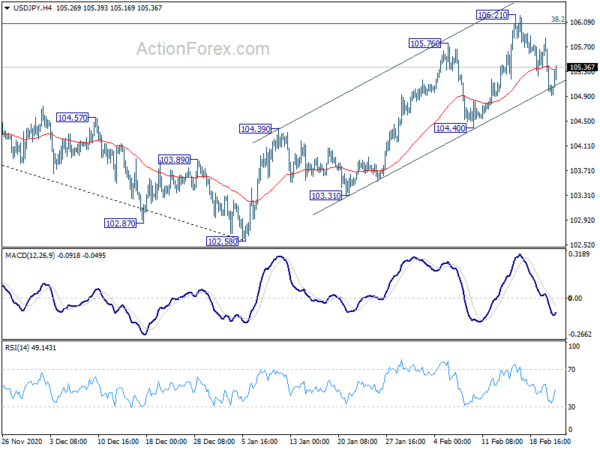 Sterling rises broadly today as UK Prime Minister Boris Johnson said he’s “hopeful” and “very optimistic ” to end pandemic restrictions on June 21, based on the “one-way road to freedom” roadmap unveiled yesterday. Canadian Dollar is Dollar is following as second strongest, with a little help from oil prices. Swiss Franc and Yen are currently the weakest for today, feeling the pressure from persistent strength in yield. Dollar’s decline slowed mildly, as markets await Fed Chair Jerome Powell’s testimony, with some attention on his comments on inflation and surging yields.

Technically, after breaching near term channel briefly, USD/JPY bends up wards and is now back above 105 handle. The pair’s reaction to Powell could help gauge the next move in reaction to Powell. In particular, a break of 104.40 support would confirm near term bearish reversal in USD/JPY and add to selling pressure elsewhere.

“The decline in metalliferous ores was driven by a decline in the quantity of iron ore exported in January. Despite the decline, exports of Metalliferous ores are the second highest on record behind December 2020,” Head of International Statistics at the ABS, Andrew Tomadini said. “A drop in global car manufacturing is leading to supply shortages, with the imports of road vehicles from Japan and Thailand, Australia’s two largest road vehicle source countries, driving the decline in January imports”.

Intraday bias in GBP/USD remains on the upside at this point. Current rally is part of the up trend from 1.1409. Next target is 1.4376 long term resistance next. On the downside, break of 1.3979 minor support will turn intraday bias neutral, and bring consolidations, before staging another rally.