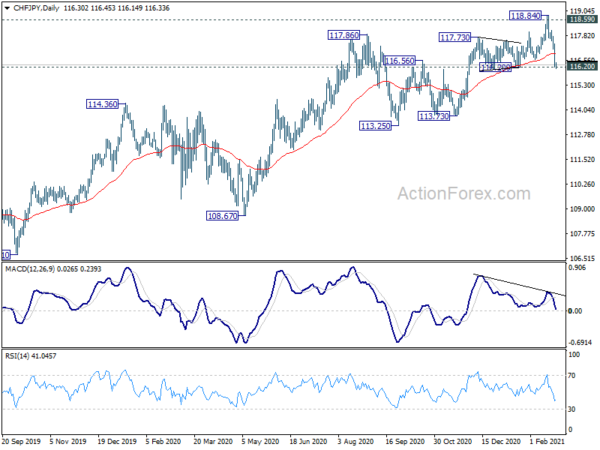 New Zealand Dollar rises broadly today after RBNZ stood pat and didn’t sound particularly concerned with the strong exchange rate. Though, Sterling remains the strongest one, continued to be supported by lockdown exit optimism. Other commodity currencies are also firm despite steady risk market sentiments. Yen and Swiss Franc are under general selling pressure, while Dollar and Euro are trailing behind. The greenback received no inspiration from Fed Chair Jerome Powell’s balanced testimony.

Technically, the selloff in Swiss Franc is worth a mention. USD/CHF’s break of 0.9044 confirms resumption of rebound form 0.8756, for 0.9127 projection level. EUR/CHF has already broken 1.0992 projection level, and is heading to 1.1059 key cluster resistance. GBP/CHF also met 1.2840 projection, and could still be in upside acceleration towards 1.3310 medium term resistance. Selloff in Swiss Franc could worsen further if CHF/JPY break through 116.20 support to confirm near term bearish reversal.

RBNZ left monetary policy unchanged today as widely expected. OCR is held at 0.25%, Large Scale Asset Purchase Programme at up to NZD 100B and Funding for lending program unchanged. Current monetary policy setting were seen as “appropriate” to achieve the central bank’s inflation and employment remit. But a “prolonged period of time” is needed before meeting the conditions of removing monetary stimulus.

In the Monetary Policy Statement, RBNZ said the economic rebound has been “stronger than expected”. But domestic recovery “has been uneven” while outlook is “highly uncertain”. “Significant stimulus is still required” and “interest rates are assumed to remain at historically low levels for an extended period.”

NZD/USD and NZD/JPY surges, RBNZ not too concerned with strong Kiwi

New Zealand Dollar surged after RBNZ rate decision, as the central bank didn’t sound particularly concerned about recent surge in exchange rate. “The gains from higher export commodity prices have been somewhat offset by the stronger New Zealand dollar” was the only thing that mentioned.

In the key baseline scenario variables, RBNZ raised the trade weighed index of NZD significantly from 71.5 to 74.9, throughout the forecast horizon. CPI inflation variables were raised at the same time while GDP growth variables were kept largely unchanged. The table suggests that NZD’s strength hasn’t altered RBNZ’s outlook much, and the central bank should still be comfortable with it.

BoC Macklem: Solid rebound expected in the immediate months ahead

In a speech, BoC Governor Tiff Macklem said Canadians “have already climbed a long way back from the very deep economic hole we were in last spring”. Much of Canada emerging from the latest round of pandemic containment measures, “we expect a solid rebound in the immediate months ahead”.

But he also said “it will be some time before we see a complete economic recovery”. Economic slack won’t be fully absorbed until into 2023. “Even as it recovers, the economy is adapting to structural changes, and some workers will need to shift to jobs in faster-growing sectors”.

“This all points to an even more protracted recuperation period while the economic potential that was lost over the course of the pandemic is rebuilt,” he added.

Fed Powell: Developments point to an improved outlook for later this year

In the semiannual testimony, Fed Chair Jerome Powell acknowledged that “the number of new (coronavirus) cases and hospitalizations has been falling, and ongoing vaccinations offer hope for a return to more normal conditions later this year”.

The economy recovery “remains uneven and far from complete, and the path ahead is highly uncertain”. But recent “developments point to an improved outlook for later this year”.

“The economy is a long way from our employment and inflation goals, and it is likely to take some time for substantial further progress to be achieved,” Powell added. “We will continue to clearly communicate our assessment of progress toward our goals well in advance of any change in the pace of purchases.”

“We are committed to using our full range of tools to support the economy and to help ensure that the recovery from this difficult period will be as robust as possible.”

Looking ahead, Germany Q4 GDP final, Swiss ZEW expectations will be featured in European session. US will release new home sales and crude oil inventories. Fed Chair Jerome Powell will have the second part of his semi annual testimony.