Can the RBA Shoot the Aussie Down? 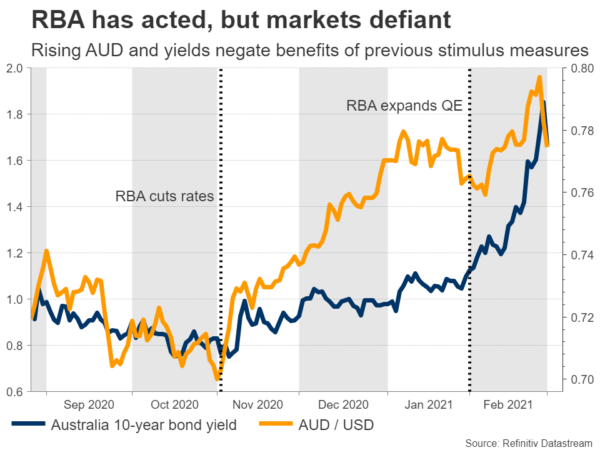 The Reserve Bank of Australia (RBA) will conclude its March policy meeting at 01:30 GMT Tuesday. The domestic economy is doing well and commodity prices have soared, but the RBA won’t be happy about the recent surge in bond yields and the exchange rate. Markets have even started pricing in rate hikes this year. Policymakers will likely push back against all this, but even so, the roaring aussie might not stay down for long.

Too much optimism priced in

The Australian economy has performed well lately. Virus cases remain extremely low and vaccinations have begun, allowing the economy to avoid new lockdowns. The labor market is healing its wounds, investment by firms is recovering and the housing market is booming. Meanwhile, commodity prices have soared, which is good news for exporters.

But everything is not rosy for the RBA. Markets seem to have run ahead of themselves in pricing in a robust recovery, propelling both the yields on Australian bonds and the Australian dollar much higher. The yield on 10-year bonds has skyrocketed since December as markets have priced in a 20% chance for a rate hike before year-end.

This is counterproductive from the RBA’s point of view. Higher yields imply higher costs of borrowing for everyone, from the government to home buyers, and a stronger exchange rate can dampen both growth and inflationary pressures. These moves essentially negate the RBA’s previous stimulus measures.

The counter-argument is that this repricing is happening for ‘healthy reasons’ as the economy recovers, so the RBA shouldn’t fight it. It is also a global phenomenon. Still, the Bank is unlikely to be comfortable with markets factoring in rate increases this year. Indeed, policymakers doubled the pace of their bond purchases this week, in an attempt to push yields back down.

What can the RBA do?

Not much admittedly. The central bank already expanded its QE program in February to fight the spike in yields and the surge in the aussie, but that had almost no effect. It could go for another QE increase now, but the result will likely be the same. A rate cut is also highly unlikely, as policymakers are not fans of negative interest rates.

Instead, the best strategy for the RBA may be simply some verbal intervention. It could highlight that it doesn’t expect to raise rates until 2024, like it did at the latest meeting, and also strike a more worried tone about the exchange rate.

This might not be particularly effective either, but it could be enough to slow down the pace of appreciation in the aussie and yields, as rate hikes in the foreseeable future are priced out again. Taking a technical look at aussie/dollar, immediate support to declines could be found near the 0.7690 zone, before the 0.7650 area comes into play.

Even if the RBA expands its QE program again to sink the aussie, it will be hard to keep the currency down for long. As long as the global recovery narrative keeps supporting commodity prices and the Australian economy is outperforming most of its peers, the outlook for the aussie remains favorable.

If the bulls retake the wheel, aussie/dollar could encounter initial resistance at 0.7775, with an upside break turning the focus to 0.7805.

Of course, that doesn’t mean there aren’t any risks. The main ones revolve around global risk sentiment and China. If the latest correction in global stock markets continues for example, or if the trade tensions between Australia and China intensify any further, the aussie may be subject to a deeper retracement.

Beyond the RBA meeting on Tuesday, the nation’s GDP data for Q4 will also be released on Wednesday at 01:30 GMT. Even though this dataset would be old news for markets, it might still attract some attention for a confirmation of the ‘strong economy’ narrative.