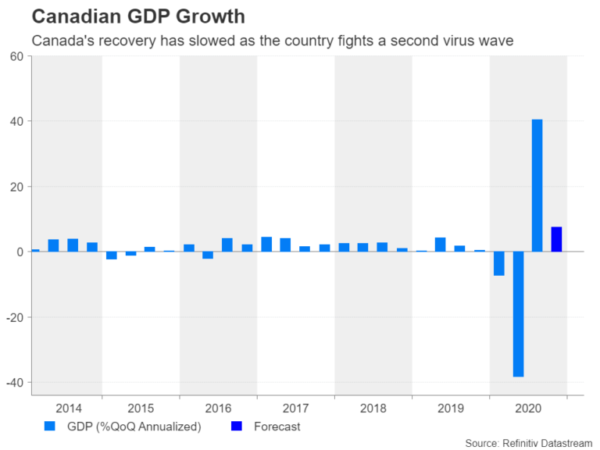 Fourth quarter GDP numbers will be watched out of Canada on Tuesday (13:30 GMT) as the recovery is expected to have lost steam. Nevertheless, the Canadian dollar has been edging higher so far in 2021 as a red-hot housing market, higher oil prices and a predicted economic boom south of the border are likely to hold back the Bank of Canada from adopting a too dovish line. However, the loonie’s ascent has been bumpier than its peers amid a number of risks. Canada is trailing behind in the global vaccination race, while the oil rally has a lot riding on the monthly output meeting by OPEC+ on Thursday.

A recovery in trouble?

Canada’s economy bounced back solidly in Q3 of last year, with GDP surging by an incredible 40.5% annualized rate. It’s still expected to have posted positive growth in the final quarter in spite of an even bigger second wave of the coronavirus that prompted fresh lockdowns. The economy is forecast to have expanded by an annualized rate of 7.5%.

The picture for the first quarter is not looking particularly good at the moment as the lockdowns extended into 2021 and likely dampened consumption further. However, the pandemic-induced economic pain is not broad based. The manufacturing sector has been going from strength to strength, home sales are soaring and rising oil prices are shoring up the oil industry after the setback from President Biden’s cancellation of the Keystone XL pipeline project.

These are all reasons why the Bank of Canada’s next move is more likely to be one of withdrawing stimulus than adding more stimulus. The Bank has already slightly scaled back its QE programme by C$1 billion a week, and with the housing market displaying signs of “excess exuberance” as acknowledged recently by Governor Tiff Macklem, pressure may soon begin to pile on policymakers to curb lending.

Growing expectations that the BoC is done easing and may well turn out to be the first of the major central banks to begin tapering have been guiding the loonie higher. Optimism about the global recovery, fuelled by the international vaccination progress and bets of more massive fiscal stimulus in the United States, have further been bolstering the local dollar.

America is Canada’s biggest export destination so a major boost in consumption there from any stimulus would benefit Canadian manufacturers as well, not to mention the broader impact of vaccines speeding up the timeline of when economies around the world can fully reopen. Yet, Canada’s own vaccine rollout has been frustratingly slow, even lagging the European Union’s efforts.

Unless the government is able to resolve the current vaccine supply constraints it is facing, the economic damage from a delayed reopening could be severe, especially as daily infections remain at elevated levels. This is a scenario that investors don’t appear to be too concerned about just yet judging by the loonie’s impressive uptrend against the US dollar, although the high intra-day volatility of the dollar/loonie pair is perhaps partly a reflection of some uncertainty about the outlook.

This markedly choppier trading is even more unusual when considering that oil prices have been edging higher in a much steadier fashion over the past few months. Oil prices have rallied by about 25% since the start of the year as investors have become more confident about the demand outlook and major producers have kept a tight grip on supply.

However, OPEC and its allies could signal a further easing of the supply curbs when they meet for their monthly decision on Thursday. A gradual lifting of output, combined with higher production from non-OPEC+ countries, as rising prices improve profitability, could eventually take the wind out of the oil rally, hurting the loonie.

If the OPEC+ decision is negative for oil prices, dollar/loonie could make another attempt to break inside the Ichimoku cloud. The cloud bottom is currently around 1.2730, which is further reinforced by the 50-day moving average. A successful climb inside the cloud would weaken the bullish bias for the loonie in the near-to-medium term, opening the way for the strong 1.2850 resistance.

However, if market reaction from the output announcement is limited and Canada’s GDP data indicates a resilient economy, dollar/loonie could head back towards the 1.26 level where the Tenkan-sen line is converging. A drop below this support would bring into scope last week’s 3-year low of 1.2464.

As a note of caution, while this week’s events have plenty of capacity to produce sharp moves in the loonie, some investors may prefer to sit on the sidelines until the next Bank of Canada policy meeting on March 10.