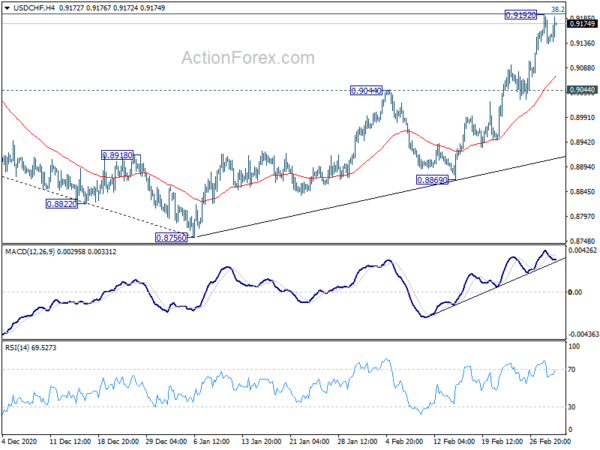 Dollar recovers in early US session as sluggish ADP job growth drags down stock futures. Additionally, treasury yields are having a mild rebound. At this point, Sterling is following as the strongest followed the day, then Canadian. New Zealand Dollar is leading Australian Lower, followed by Swiss Franc and Yen. Eyes will now be on the movements in yields, and the reactions and stocks and overall sentiments.

Technically, USD/JPY’s breach of 106.95 temporary top suggests that recent rally might be ready to resume. At the same time, USD/CHF is attempting a take on 0.9192 temporary top too. On the other hand, AUD/USD retreats ahead of 0.7844 minor resistance while USD/CAD recovers ahead of 1.2586 minor support. The greenback appears to be finding momentum to rebound against commodity currencies. Though, break of theses two levels, if accompanied by strength in stocks, would likely send Dollar lower elsewhere again.

US ADP employment grew only 117k, sluggish recovery across the board

“The labor market continues to post a sluggish recovery across the board,” said Nela Richardson, chief economist, ADP. “We’re seeing large-sized companies increasingly feeling the effects of COVID-19, while job growth in the goods producing sector pauses. With the pandemic still in the driver’s seat, the service sector remains well below its pre-pandemic levels; however, this sector is one that will likely benefit the most over time with reopenings and increased consumer confidence.”

ECB de Cos: Increase in long term nominal rates may have negative impacts

Instead, “in a setting where inflation expectations are well below our aim, a decrease in real interest rates would have made a greater contribution to the recovery and helped achieve this aim,” he said. “The need to maintain very accommodative financing conditions is justified because we are a long way from achieving our inflation aim.”

Eurozone PMI composite finalized at 48.8, on course for a double-dip recession

Chris Williamson, Chief Business Economist at IHS Markit said: “A fourth successive monthly drop in business activity puts the eurozone economy on course for a double-dip recession… it’s becoming clear that many virus-fighting measures will need to be in place for some time to come, in part due to the slow vaccine roll-out. This could extend the drag on the economy from the pandemic into the second half of the year and subdue the pace of recovery.

“A key question will be the extent to which these containment measures will limit the supply of goods and services at a time of recovering demand, as this will in turn determine pricing power in coming months and affect how long the current bout of sharply rising prices will persist.”

Tim Moore, Economics Director at IHS Markit: “UK service sector activity was relatively stable in February and so it appears that the third national lockdown has seen limited spillovers to parts of the economy beyond the scope of government mandated closures… Tighter restrictions on international travel meant that export sales remained an area of weakness for the service economy… Higher fuel bills and shipping costs pushed up operating expenses in February. Service providers have mostly absorbed pressure on margins from rising input costs over the past 12 months, but their latest increase in average charges was the fastest since the start of the pandemic”.

Head of National Accounts at the ABS, Michael Smedes said: “Despite the two consecutive quarters of strong growth, economic activity remained 1.1 per cent lower than recorded in the 2019 December quarter.” This is the first time in the over sixty year history of the National Accounts that GDP has grown by more than 3.0 per cent in two consecutive quarters.

China Caixin PMI Services dropped to 51.5 in February, down from 52.0, slightly below expectation of 51.6. Markit noted that services activity growth eased to ten-month low. There was softer increase in total new work amid renewed drop in export sales. Nevertheless, confidence regarding the 12-month business outlook remained robust. PMI Composite dropped to 51.7, down from 52.2.

Wang Zhe, Senior Economist at Caixin Insight Group said: “To sum up, the momentum of manufacturing and services recovery further weakened. Overseas demand was sluggish and the job market was under higher pressure. Inflationary pressure continued to grow. Despite these headwinds, manufacturers and service providers were still optimistic. The confidence mainly came from the experience in fighting the pandemic over the past year, as well as the expectation that winter Covid-19 flare-ups were coming to an end. Also, companies were confident in the future outlook for their new products.

Goushi Kataoka, the most dovish BoJ board member, said “it’s hard now to foresee inflation powerfully heading towards our 2% target.”

“in order to prevent Japan’s economy from falling into deflation, further policy coordination of both fiscal and monetary policy is needed,” he added. “It was necessary for the BOJ to strengthen its policy commitment by relating the forward guidance for policy rates to price targets.”

Intraday bias in USD/CHF remains neutral as consolidations from 0.9192 temporary top could still extend. But overall, But further rally is expected as long as 0.9044 resistance turned support holds. Sustained break of 38.2% retracement of 0.9901 to 0.8756 at 0.9193 will target 0.9295 resistance. Firm break there will carry larger bullish implications and target 61.8% retracement at 0.9464 next.