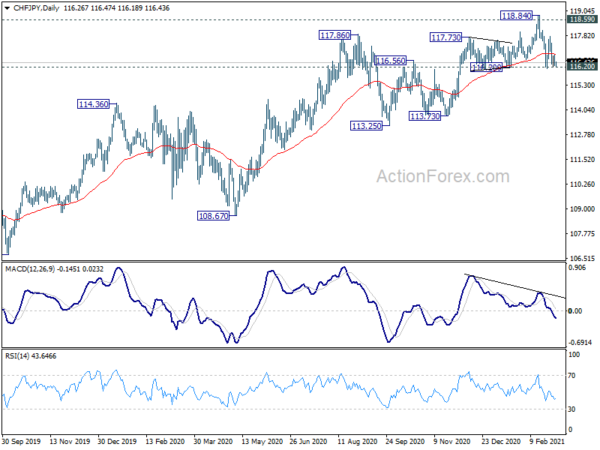 Huge volatility continues in stock markets as Asian indices dive following the selloff in US overnight. But movements in exchange rates are relatively subdued, and mixed. Swiss Franc, Yen and Euro are currently the weaker ones for the week, followed by Dollar. Australian Dollar is leading other commodity currencies and Sterling as the strongest. However, odds of a come back of risk aversion is building, with NASDAQ near completing and head and shoulder pattern. Fundamentally, we’ll have a speech by Fed Chair Jerome Powell today, and US non-farm payrolls tomorrow, which could trigger more volatility.

Fed’s Beige Book noted that economic activity expanded “modestly” from January to mid-February for most Districts. “Most businesses remain optimistic” regarding the next 6-12 months, with vaccine distributions.

Consumer spending and auto sales were “mixed”. Despite “challenges from supply chain disruptions”, overall manufacturing activity for most districts “increased moderately”. Employment levels rose, albeit slowly” in most district. Wage increases for many districts are “expected to persist or to pick up somewhat” over the next several months.

In many districts, rise in costs was “widely attributed to supply chain disruptions and to strong overall demand”. Transportation costs “continued to increase” partly on rising fuel costs and capacity constraints. Several districts reported “anticipating modest price increase over the next several months”.

Australia retail sales rose 0.5% mom in January, slightly below expectation of 0.6% mom. Comparing to a year ago, sales turnover rose 10.6% yoy. All state and territories reported growth, except Queensland with -1.5% mom decline. Western Australia reported strongest sales growth by 2.1% mom, followed by Victoria and Tasmania at 1.0%.

RBNZ Orr: We will not be resuming business as previous in its entirety any time soon

RBNZ Governor Adrian Orr said in a speech, the current pic up in economic activity is “sector and event specific”, and “we will not be ‘resuming business as previous’ in its entirety any time soon”.

While the initiation of global vaccination program is positive, “there remains a significant period before widespread immunity is achieved”. In the meantime, “economic uncertainty will remain heightened and international mobility restrictions will continue”.

Outlook in USD/CAD is unchanged and intraday bias remains neutral for the moment. Rebound from 1.2446 could still extend with another rise through 1.2742. But overall, outlook will remain bearish as long as 1.2880 resistance holds. Below 1.2586 will turn bias to the downside and bring retest of 1.2466 low first. However, sustained break of 1.2880 will argue that fall from 1.3389 has completed and bring stronger rise to 1.2994 support turned resistance.

In the bigger picture, fall from 1.4667 is seen as the third leg of the corrective pattern from 1.4689 (2016 high). Further decline should be seen back to 1.2061 (2017 low). In any case, break of 1.2994 support turned resistance resistance is needed to indicate medium term bottoming. Otherwise, outlook will remain bearish in case of strong rebound.