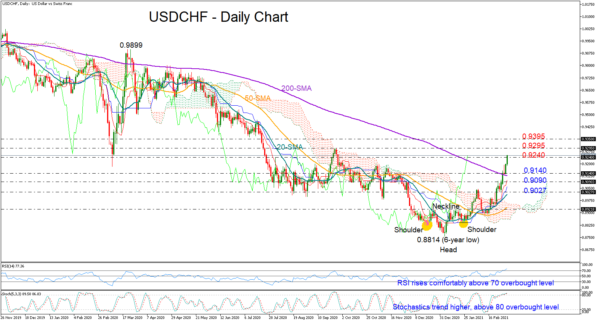 USDCHF found new buyers above the 200-day simple moving average (SMA), advancing its bullish impulse towards a fresh six-month high of 0.9236 on Thursday.

The buying appetite in the market drove the RSI and the Stochastics well into the overbought area, though with the indicators showing no convincing signs of weakness, traders may wait a bit before selling the pair.

Currently, the price seems to be facing some downside pressures slightly below the 0.9240 level, which acted as resistance a few times during 2020. If the bulls claim that number, the way will open towards the swing high of 0.9295. Higher, the rally is expected to take a breather around 0.9350.

On the downside, initial limitations could occur near 0.9140, a break of which could see some consolidation near the supportive red Tenkan-sen line at 0.9090. Slightly lower, the former barrier of 0.9027, where the 20-day SMA is converging, may be another key spot to watch.

Summing up, USDCHF continues to strengthen its positive outlook following the creation of a bullish inverse head and shoulder pattern near a six-year low of 0.8814 in January. A downside correction, however, should not come as a surprise in the coming sessions as the pair is sailing in overbought waters.