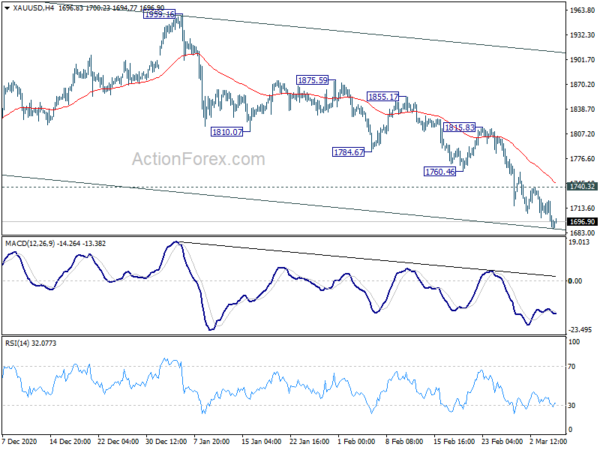 Dollar rises further in early US session after much stronger than expected non-farm payroll report. 10-year yield also surges and it’s now back above 1.6 handle. The greenback in currently the second strongest for the week, only overwhelmed by the oil supported Canadian Dollar. While Swiss Franc and Yen are trying to recover against others, in particular commodity currencies, both are still the worst performing for the week.

Technically, Dollar’s strength is now being more convincing with break of 1.3828 support in GBP/USD and 0.7591 temporary low in AUD/USD. A focus is on whether gold would break through medium term channel support, to accompany further rally in Dollar. Or, gold would stabilize from here and recover first. We’d probably only find out early next week.

BoJ Governor Haruhiko Kuroda told the parliament today that “it’s important to keep the yield curve stably low for the time being.” The central bank allows 10-year JGB yield to move inside a band around 0% to “enhance bond market functions”. But given recent surge in yields, “much more debate” was needed before deciding to widen the band.

“It’s a difficult decision,” Kuroda said, “the economy remains under pressure from the COVID-19 pandemic.”

“We have been and must continue to buy ETFs flexibly,” he said. “We’ll discuss at the March review how specifically we could make our purchases more nimble”.

Ai Group Chief Executive, Innes Willox, said: ” While the continued improvement in conditions is heartening, employment fell in February following a strong recovery in the preceding months. Employers and employees will be hoping that the further growth in new orders recorded in February signals the continued recovery of sales and employment over the next few months.”