Week Ahead: And You Thought Last Week Was Interesting? ECB, US Auctions, and Inflation 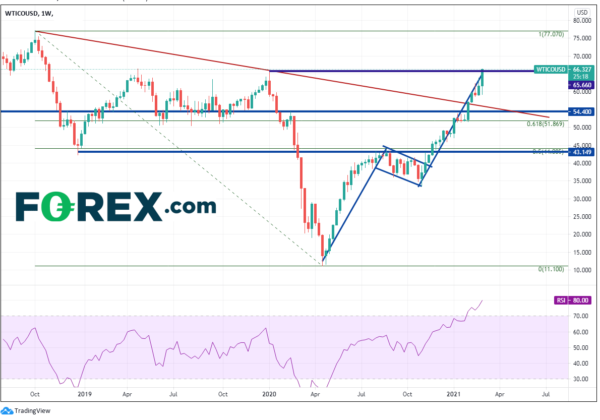 Last week, markets were on edge as yields and the US Dollar continued to rise and stocks were mixed.  Federal Reserve Chairman Jerome Powell spooked traders when he reiterated that the Fed is not concerned with rising yields nor rising inflation expectations.  On Wednesday the US will get the February reading for CPI, which will give traders another tool to determine inflation expectations.  In addition, the US will hold 3-year, 10-year, and 30-year auctions this week.  Given how terrible the 7-year auction went recently, these will be closely watched.  The US Senate is also expected to vote on the stimulus package. The ECB and the BOC will meet this week.  Some members from the ECB mentioned last week that the central bank should intervene to keep yields low. Comments will be watched closely.  Lastly, Canada will release their Employment Change on Friday.

US Federal Reserve Chairman Jerome Powell spoke on Thursday regarding the US economy at the WSJ Jobs Summit.  He reiterated what he, and several FOMC members, had been saying:

As he was speaking at a jobs conference, Powell noted that the mandate of the Fed was controlling inflation AND maximizing employment.  He noted that there are still 10 million jobs lost since the pandemic began.  He said that the Fed will focus on job creation and that he is more concerned about low labor force participation, rather than inflation.  On Friday, the US released its Non-Farm Payroll data.  The headline number was +379,000 vs an expectation of +180,000.  Although this barely puts a dent in the 10 million jobs still lost, most of these jobs were in the hospitality sector.  As economies around the world begin and continue to reopen,  watch for these numbers to increase.  This week, the US will release February’s CPI data.  Expectations are for the YoY headline number to increase from 1.4% to 1.7%, while the Core inflation Rate is expected to remain unchanged at 1.4%.

On February 25th, the Treasury auctioned off 7-year Treasuries, and the auction went horrible.  There was light demand, and dealers were left holding much of the supply.  The lack of demand caused bond prices to move lower and yields to move higher.  This also caused the US Dollar to move higher and stocks to move lower.  This week, the US Treasury will auction 3-year notes on Tuesday, 10-year notes on Wednesday, and 30-year bonds on Thursday.  The results of these auctions will be closely monitored to see if demand has improved over the last 2 weeks. If so, traders may expect yields and the US Dollar to move lower and stocks to move higher.

Stimulus in the Senate

The $1.9 stimulus package proposed by US President Joe Biden and passed by the US House of Representatives is sitting in the Senate.  While most of the package is complete, including a recent agreement to extend emergency unemployment benefits through September, there are a few Senators trying to add additional amendments to the bill.  However, a vote is likely to occur soon (as early as this weekend) and the bill is expected to pass.  Anything short of the bill passing similar to its current form in a timely manner could upset the markets.

This week will bring interest rate decisions from the Bank of Canada (BOC) on Wednesday and the European Central Bank (ECB) on Thursday.  The BOC is expected to leave rates unchanged at a record low 0.25% and continue with its QE program of at least $4 billion per week.  As for the rise in yields,  Bank of Canada Governor, Tiff Macklem, echoed Fed Chairman Powell