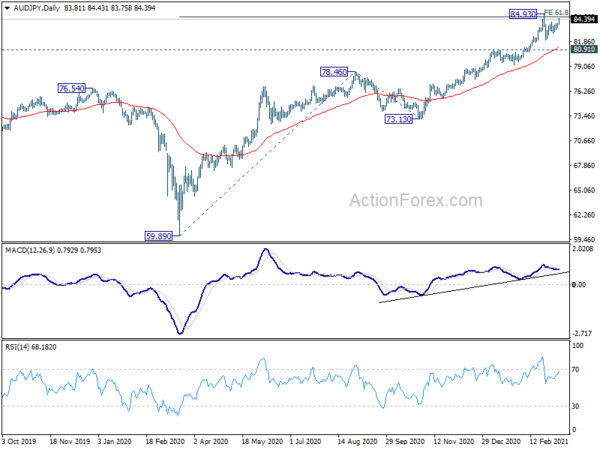 Technically, on focus today is on the extend of Dollar’s pull back. Break of 1.1951 resistance in EUR/USD, would argue that the pair has bottomed in the near term. Similarly, break of 1740.32 resistance gold will also indicate short term bottoming, adding to pressure on Dollar in general. Another focus would be on commodity Yen crosses. For example, AUD/JPY could have a test on 84.93 resistance today if the improvement in sentiments continue. Break there will resume whole up trend form 59.89.

US 10-year yield to settle in 1.4/1.6 range as bond auction cleared investor fears

The closely watched US treasury bond auction overnight was soft, but enough to temporarily ease investors’ worry of an avalanche collapse in demand. USD 38B in 10 year treasuries were sold, with bid-to-cover ratio of 2.38, just slightly below one-year average of 2.42. Focus will now turn to 30-year auction today.

DOW hit near record high overnight, with help from retreat in bond yields, as well as passage of the USD 1.9T economic stimulus package. The bill was parted in the House by 220 to 221, after going through the Senate with 50.49 on Saturday. The bill will now head to the White House for signature of President Joe Biden.

As there is no clear sign of upside acceleration for now, we’d be cautious from strong resistance from this projection level. But still, break of 30547.53 support is needed to indicate topping. Or outlook will remain bullish.

EUR/CAD weak in tight range after BoC, down trend intact

Canadian Dollar stays firm in general after BoC left monetary policy unchanged yesterday, and delivered and slightly more upbeat outlook. While interest rate will remain on hold until into 2023, the central bank is ready to taper asset purchases if board members “gain confidence in the strength of the recovery”.

EUR/CAD turned into consolidation after hitting as low as 1.4984 earlier this week. Some sideway trading could be seen but upside of recovery should be limited below 1.5208 support turned resistance to bring down trend resumption. Current down trend should target 161.8% projection of 1.5978 to 1.5313 from 1.5783 at 1.4707 on next fall.

EUR/GBP vulnerable ahead of ECB, comments on yields eyed

ECB is a major focus for today and no change in monetary policy is expected. In the updated economic projections, growth forecast will likely be revised lower, reflecting weaker than expected Q1 activities due to lock downs. On the other hand, inflation forecasts could be revised up to reflect recent rise in inflation expectations, commodity and energy prices.

Reflation trades have sent global yields since February. While this phenomenon is more remarkable in US Treasury, European yields have also increased a lot. The development prompted some cautious comments from officials. But there appears no consensus on the way to handle the issue yet. The markets would be eager to see President Christine Lagarde shedding some likes on whether ECB would recalibrate the instruments again, in response to surge in yields.

EUR/GBP would be one to watch in reaction to the event. Recovery from 0.8537 was limited well below the falling 55 day EMA, keeping near term outlook bearish. Break of 0.8537 will extend the whole pattern from 0.9499 towards 0.8276 key long term support level.

On the data f