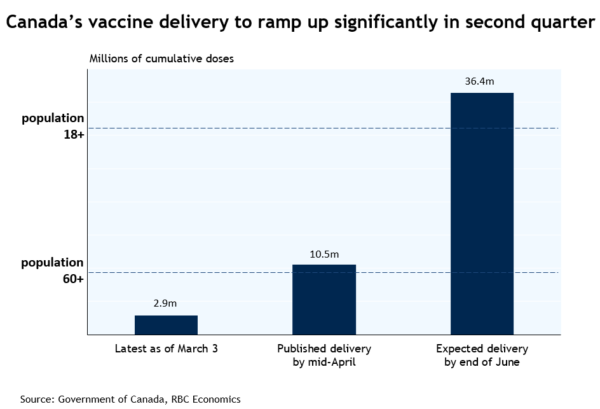 After falling behind peers, vaccine delivery in Canada is anticipated to ramp up significantly over the coming months. Canada is now expecting around 8 million doses by the end of March, and as many as 36.4 million doses by the end of H1 2021. That would be enough to cover everyone above the age of 18 with at least one shot, contingent on the formal adoption of the new dosing guidance (from the National Advisory Committee on Immunization) that suggests the second vaccine dose can be delivered up to 4 months after the first. Thus the pace of vaccination is set to accelerate despite the persistence of distribution hurdles.

Next week’s economic data reports will reinforce what has been a surprisingly resilient economic backdrop over the past couple of months. Local real-estate market boards have already flagged another exceptionally strong increase in home resales in February. And after a weaker January (as suggested from StatCan’s preliminary estimate), retail sales also looked decidedly better in the month after, potentially retracing much of the drop over the prior two months. To add to that, manufacturing sales jumped 2.5% in January despite reports of supply chain disruptions weighing on auto production. And residential building activity likely remained very strong to-date, in line with surging permit issuance.

With growth concerns beginning to fade, attention has shifted to whether demand could recover too quickly, outstripping supply and prompting stronger inflation. We expect Canada’s headline CPI increased to 1.2% in February from January’s 1.0% print. And that will almost certainly spike significantly higher over the spring thanks to very low year-ago energy prices. However, this boost is expected to prove temporary and attention will turn to core price trends (outside of volatile components like food & energy products) for any signs that underlying price pressures are building.

Similar to the Bank of Canada this week, the US FOMC announcement next Wednesday will likely reiterate that the central bank is in no rush to withdraw policy support despite further improvement in the economic backdrop. The accompanying economic projection will likely be upgraded as well, given stronger near-term data and better medium-term outlook. Their latest projection had the economy growing 4.2% in 2021, well below RBC’s 6.2% forecast.