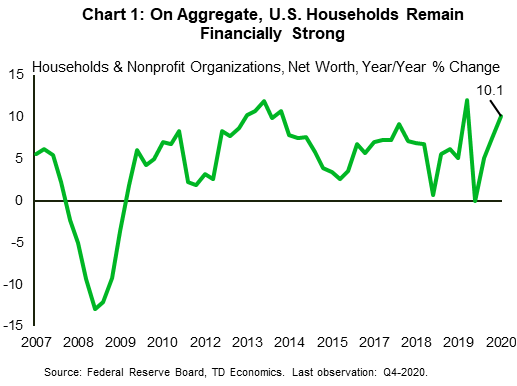 This week marks one year since the start of global lockdowns and economic disruptions due to the coronavirus pandemic. And while no one can say that the crisis is over, it is starting to feel like the end is finally approaching. Thanks to unprecedented policy support, the economic slump has been short-lived, and prospects for recovery look much brighter than initially predicted. We expect that the American Rescue Plan, signed into effect on Thursday, will lift economic growth to roughly 6% this year, the highest rate since 1984.

The new fiscal package is huge. It provides a fresh round of $1,400 checks starting as early as this weekend, extends unemployment benefits of $300 per week until September, increases the child tax credit (and makes it fully refundable), provides aid to states and local governments, supports schools and expands vaccination efforts.

Substantial income supports have enabled Americans to maintain strong balance sheets through this crisis. According to the Fed’s data released yesterday, U.S. households’ and non -profit organizations’ net worth reached a record high of $130 trillion, growing 10% in the last quarter of 2020. (Chart 1). Nevertheless, income and wealth disparities, exacerbated by the crisis, continue to pose risks to the recovery.

On the economic front, data was scarce this week. A highly anticipated Consumer Price Index (CPI) report came in on market expectations. Gasoline and food prices continued to rise, driving the headline index 1.7% higher over the past year. Still, core inflation (excluding these volatile categories) remained soft, rising by 0.1% on the month and edging lower on the year-on-year basis to 1.3% from 1.4% in January.

Still, a closer look at the core prices reveals a shift in recent trends. Supported by the housing component of the index, the decline in core services prices was halted at 1.3% year-on-year (Chart 2) in February. Indeed, strong demand for housing has lifted home prices by at least 10% since 2019, even as rents in major urban centers have gone in the opposite direction. Goods’ price growth, on the other hand, softened in February reflecting a pull-back in used car prices, one of the biggest price outperformers of the pandemic.

The news of muted price growth gave the market’s inflation anxiety a short break. The 10-year U.S. Treasury yield subsided from its last week’s peak of 1.60% to just under 1.50%, before bouncing back to almost 1.62% at the time of writing. Despite solid demand in this weeks’ three U.S. Treasury auctions, investors are increasingly betting on higher inflation. As we wrote recently, the Fed will be mindful of mounting price pressures, but its new framework gives it more wiggle room for letting inflation move above 2%.

The Fed’s primary concern remains a sustained labor recovery. With the strongest economic growth in recent history, this should be achieved over the next two years. In the meantime, with the virus still spreading, the recovery remains fragile and unequal, requiring policy to remain accommodative.

The pandemic economy has presented new challenges for forecasters. Updating the economic outlook has required following the course of the pandemic and adjusting to public health announcements. But, the economic impact of lockdowns has not been constant over time. The first round of lockdowns was extremely severe, but later rounds have had smaller negative impacts as businesses and households better adapted to the pandemic and associated restrictions.

At the same time, the usual volatility in economic data has been supercharged. Nowhere is this more apparent than in the labour market. Canada’s monthly Labour Force Survey (LFS) is already notoriously volatile, but the last few months have been off the charts. After shedding 265 thousand jobs in December and January (1.4% of the total) as lockdowns tightened in Ontario and Quebec, nearly all of these (259k) were added back in February (Chart 1). As a result, the unemployment rate has seesawed, rising to 9.4% in January before falling back to 8.2% in February (Chart 2) – the lowest level since March of last year.

Volatility notwithstanding, economic forecasts are once again on the upswing. This is partially due to continued progress on producing and distributing vaccines – though Canada has lagged on this front – but even more, it is due to evidence that the economy has proved much more resilient to the continuation of the health crisis. Instead of pulling back, economic growth has remained positive. At the same time, while job losses were felt in industries directly impacted by lockdowns, other sectors added jobs and hours, and recovery has been swift as restrictions were lifted.

This is a challenge not only for humble bank economists like us, but also for the Bank of Canad