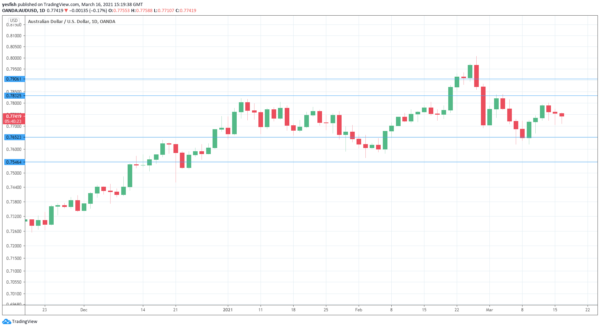 The Australian dollar is having a quiet Tuesday session. Currently, the pair is trading at 0.7744, down 0.14% on the day.

The RBA minutes were a non-market mover on Tuesday, as there were no surprises from the central bank. The committee remains focused on employment and wage expectations. The minutes noted the sharp appreciation in the Australian dollar since November 2020, adding that the currency was “lower than it would have been otherwise as a result of the Bank’s policies.” The committee reiterated that they did not anticipate raising interest rates prior to 2024. This dovish stance is consistent with the Federal Reserve, which has said it does not plan to raise rates prior to 2023. Lowe wants to see inflation move up to the bank’s target of between 2% and 3%, and only then raise rates.

The federal government does not appear to share the RBA’s stance on stimulus, and this divergence could become a concern for investors. The central bank recently extended its QE programme, which is a crucial component of its ultra-dovish monetary policy. However, the federal government wants stimulus to be tapered and let the private sector shoulder more of the recovery. Last week, RBA Governor Lowe acknowledged that low interest rates had fueled the housing boom, but insisted that the bank would not change its policy based on housing market considerations.

As for the housing market, the House Price Index jumped 3.0% in the fourth quarter of 2020, up sharply from 0.8% beforehand. This easily beat the forecast of 1.9%. The housing market has been red-hot, and both the RBA and the government will have to keep a close eye on this sector.