Dollar Falls on Risk-On Sentiment after FOMC, Aussie Powers Up on Job Data 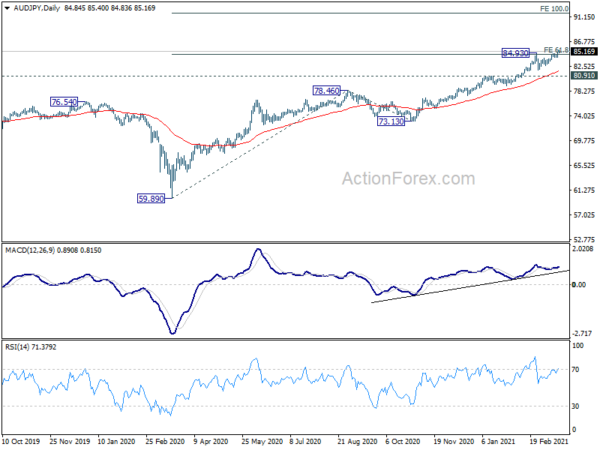 Dollar dropped broadly overnight as markets turned into mild risk-mode following FOMC rate decision. A better economic outlook was painted by the new economic projections. Yet, Fed is clear that it’s not even considering tapering the asset purchases for now. DOW and S&P 500 rose to new record while 10-year yield also closed higher. Commodity currencies are currently the strongest ones for the week. Extra strength is seen in Aussie today after much stronger than expected job numbers. Focus will now turn to BoE rate decision.

Powell said in the post meeting conference that “substantial progress” is needed before policymakers consider dialing back the asset purchases. “Until we give a signal, you can assume we’re not there yet,” he emphasized. “As we approach it, well in advance, well in advance, we will give a signal that yes, we’re on a path to possibly achieve that, to consider tapering.”

Some suggested readings on FOMC:

Australia employment rose 88.7k in Feb, back at pre-pandemic level

Bjorn Jarvis, head of labour statistics at the ABS, said “The strong employment growth this month saw employment rise above 13 million people, and was 4,000 people higher than March 2020.”

“Activity in the December quarter shows a mixed picture – some industries are down, but others have held up or risen, despite the ongoing impact of COVID,” national accounts senior manager Paul Pascoe said. At the industry level 7 out of 16 industries declined. The two largest contributors to the drop were construction, and retail trade and accommodation.

BoE is generally expected to keep bank rate unchanged at 0.10% today, and hold the QE target at GBP 875B. Both decisions should be by unanimous 9-0 votes. Governor Andrew Bailey sounded upbeat about economy economy in his comments earlier this week, even though that came with “a large dose of caution”. He’s also comfortable with the rise in real interest rates, as that was “consistent with the change in the economic outlook.”

On point to note was chief economist Andy Haldane’s warning on inflation last month. He said, there is a tangible risk inflation proves more difficult to tame, requiring monetary policymakers to act more assertively than is currently priced into financial markets…. the greater risk at present is of central bank complacency allowing the inflationary (big) cat out of the bag.”

We’d watch for clues on the overall views of the MPC on the issue of growth, yields and i