Week Ahead: Coronavirus, MOAR Powell, and US Treasury Auctions 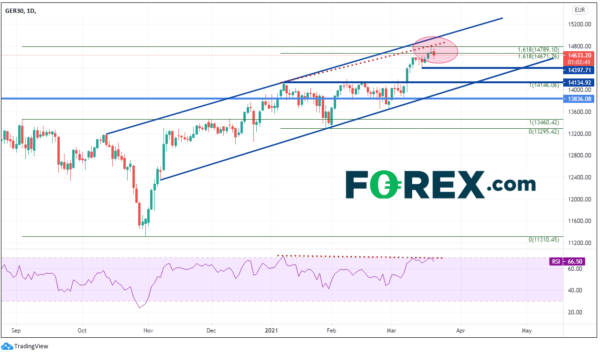 After a jam packed, Central Bank dominated week, things will begin to slow down as spring arrives.  There were no major surprises from the FOMC, BOE, and BOJ last week, however the peripheral central banks of Turkey and Norway were notably concerned about inflation.  This week, as the vaccine rollouts continue, the coronavirus makes its way back to the front page as Europe is said to be facing a 3rd wave of new cases.  Can Europe get vaccines quick enough to thwart another major lockdown?  In addition, Powell will be speaking 3 times this week, however after his dovishness at the FOMC meeting just last week, there should be no change in his views.  In addition, the US will hold 2-year, 5-year, and 7-year auctions.  Markets will be watching to see if the demand is there to make them successful!

If there were any major surprises from the major central banks which met last week, it’s what they didn’t say! After the rise in yields and inflation expectations over the past month, some traders thought  the Fed and the BOE would be a bit less dovish.  However, Powell was extremely dovish, noting that they are years away from hiking rates.  Investors were hoping the BOE’s Bailey would back up his comments from January’s meeting that they “did not mean to imply that they would use negative rates”. Instead, he hedged himself and noted that the BOE will do more if necessary.  See complete recaps below

Europe and the Coronavirus

In the US, after a slow start, vaccine rollouts are going smoothly.  Biden reached his goal of 100 million jabs in 100 days well in advance of his deadline and he pledged that all adults in the US will be eligible for COVID-19 vaccines by May 1st! Cities which haven’t done so already, are expanding indoor capacity limits and getting children back to school. In the UK, more then 26 million people have been vaccinated.  Although there was a hiccup with the AstraZeneca vaccine, they are expecting to have everyone eligible to receive a vaccine by late July.  Schools are reopening and they have a plan to reopen the economy.

On the other hand, countries in the EU are facing increasing number of new cases, as well as, new or extended lockdowns and restrictions. The faster-spreading variants seem to be outpacing the rollout of the vaccines. Northern France and Paris are in lockdown for a month.  Italy has imposed nightly curfews.  Each region is assigned a color zone, red, orange and white, depending on infection rates.  All but 1 region is in the red or orange zone. In Germany,  restrictions were expected to expire on March 22nd.  However, Merkel is meeting with Head of States on Monday to determine whether lockdowns should be extended.  According to Germany’s health minister, hopes are dim that restrictions will be lifted. Vaccine inoculations were halted across much of Europe recently as the AstraZeneca vaccine was thought to cause blood clots.  However, the European Medicines Agency (EMA) said the vaccine is “safe and effective” on Thursday, and many countries began distribution once again. Most of the new cases are now faster-spreading variants, such as the B.1.1.7 (UK variant).  It’s now a “variant vs vaccine” race to control the pandemic.  (Note: new variants are showing up in other regions of the world as well, including the US.  Only time will tell if other areas can vaccinate quicker than the variants morph.)  The European “3rd wave” will be a topic to watch this week.

US Fed Chairman Powell, in addition to other Fed members,  is set to speak on Monday, Tuesday, and Wednesday this week.  However, the first 2 discussions are with the BIS regarding innovation in a digital age.  The testimony on Wednesday is the one to watch.  Powell will be speaking before the Committee on Banking, Housing and Urban Affairs at the US Senate. Although he is unlikely to change his tune, senators may be looking for clarification to some of his recent comments regarding interest rates and inflation.  Even after the FOMC meeting on Wednesday, bond markets seemed to be calling Powell’s bluff. However, he has indicated that the Fed wants actual data, not just forecast, before they begin tapering.

This week, the US Treasury will auction off $180 billion in 2-year, 5-year, and 7-year notes, as well as $26 billion in 2-year floating rate notes (FRN).  Recall on February 25th, when the demand for the 7-year auction was weak.  This began a swift rise in yields as traders began to worry about international demand.  Rates are higher now, and perhaps the price is right for buyers.  These auctions will be closely monitored.  A repeat of the February 25th 7-year auction could see yields soar even higher.  Since February 25th, 10-year yields are nearly 36 bps.  The Fed says this is transitory.  We’ll know more this week.

The earnings calendar is very light this week, however reddit users will be monitoring the earnings release of their favorite meme stock, GME.  Other notable earnings this week are ADBE and PTR.

The economic data calendar is also light this week, as next week brings month-end and beginning of April data.  However, in addition to Powell and the auctions, there is a host of UK data on the docket for this week.  We also get our first look at global PMIs.  Other important economic data is as follows: