Yen Mildly Higher While Nikkei Tumbles, SNB a Focus in the Week 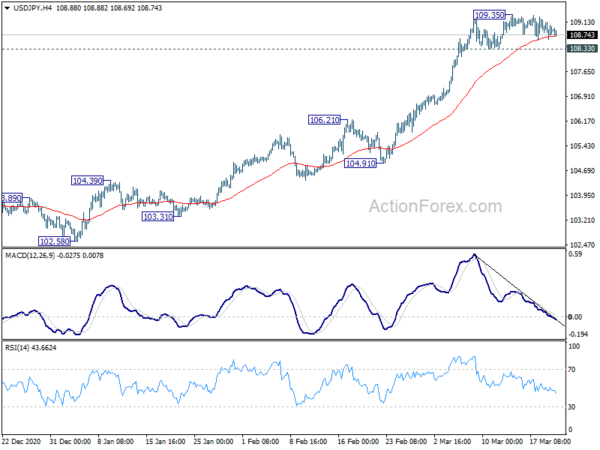 Nikkei trades sharply lower today as selloff continues after BoJ decide to exclude Nikkei-linked ETF from its purchases. Though, Topix is also trading down deeply. The Japanese markets are weighed down by news that a fire-damaged automotive semiconductor plant is going to take at least a month to restart. Outlook Japan, markets are generally rather calm. Yen is trading mildly higher, followed by Dollar and Swiss. Australian and New Zealand Dollar are the softer ones so far.

Technically, there is prospect of deeper pull back in Yen crosses, in particular EUR/JPY and GBP/JPY, as near term correction. USD/JPY is also a focus as rebound in Yen could be capped as long as 108.33 minor support holds. However, break of 108.33 would also trigger a corrective falling in USD/JPY, which could prompt more buying in Yen elsewhere.

BoJ Governor Haruhiko Kuroda told upper house financial committee that wit the review of ETF purchases, the central bank could continue to use easing policy “more flexibly and effectively.” ETF purchases are also a vital part of the yield curve control, which will guide YCC to avoid impact of stock prices. Currently, the central bank is not considering selling ETF holdings at all, nor halting purchases.

Additionally, Kuroda also emphasized the need to maintain the 2% inflation target. He said that it’s a “global standard” and “must not change”. The inflation target also helps stabilizes currencies among major economies.

Fed Barkin: We are going to see an extremely strong year

Richmond Fed President Thomas Barkin said in a Bloomberg TV interview over the week end that “We are going to see an extremely strong year and I think that strong year is going to lead to price pressures.. But he noted policymakers “haven’t seen” unwanted inflation yet. Also, “our guidance suggests we would be raising rates were inflation to spike past our targets.”

Barkin also attributed the recent rise in treasury yields to brightening economic outlook. “Many of the days where there have been movements have been days where you’ve had really good news on the vaccines or really good news on fiscal stimulus,” he said. “To the extent that yields are responding to the economy, I think that’s what you want them to do.”

In the remarks at a Credit Suisse conference later, he said, “While there are no immediate signs of a U.S. debt crisis, we should be wary of diminishing our fiscal capacity to respond aggressively to the next crisis. Once the economy is on stable footing again, it will be important to take steps to get our fiscal house in order.”

SNB is widely expected to keep monetary policy unchanged. It will likely reiterate the need for negative interest rate and currency intervention. BoJ will release meeting minutes while ECB will release monthly bulletin.

On the data front, global PMIs will be the main focus of the week, for gauging the momentum for recovery in Q2. Additionally, UK will release employment, inflation and retail sales; Germany will release Gfk consumer sentiment and Ifo business climate. Also, US PCE inflation will be closely watched, as inflation is currently a much talked about topic.

Intraday bias in EUR/JPY remains mildly on the downside at this point. Correction from 130.65 short term top could extend lower towards 55 day EMA (now at 127.93). But downside should be contained above 127.48 resistance turned support to bring rise resumption. For now, risk will stay mildly on the downside for more corrective moves as long as 130.65 holds, in case of recovery.