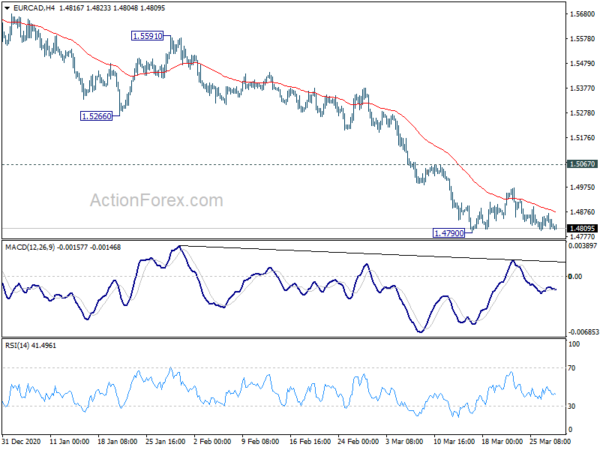 Yen trades generally lower today following surging treasury yields and some firmness in stock markets. While it’s not yet a full risk-on market, sentiments are positive for now. Swiss Franc, Euro and Dollar also turn slightly softer. On the other hand, commodity currencies and Sterling are trading generally higher.

Technically, the downside breakout in EUR/GBP yesterday was a bit disappointing as it quickly recovered, as Sterling’s rally attempt faltered. Though Euro still looks rather vulnerable for now. In particular, EUR/CAD is set to test on 1.4790 low again and break there should confirm resumption of larger down trend. Developments in EUR/CAD would be an early indication of more broad based Euro selling.

BoJ Kuroda: Absolutely not that case of exiting ultra-loose policy

BoJ Governor Haruhiko Kuroda reiterated in an interview with the Japan Daily, the central bank had “absolutely no play” to stop ETF purchases, or unload its holdings. “We will continue to buy ETFs flexibly and in a nimble fashion, so it’s absolutely not the case that we are exiting ultra-loose monetary policy”, he added.

US long term treasury yields jumped again overnight, with 10-year yield closed up 0.061 at 1.721, 30-year yield gained 0.057 to 2.424. Sentiments were positive on vaccine rollouts and return-to-normal in the US. President Joe Biden announced that the “vast, vast majority of adults”, 90%, will be eligible for coronavirus vaccine by April 19. Participating pharmacies will also more than double to 40k.

10-year yield’s strong rally yesterday suggests that 1.585 near term support was defended well after last week’s retreat. While upside momentum diminished as seen in daily MACD, there is no sign of a change in up trend yet. Current rally is still on track to 2% handle, which is close t 1.971 resistance and 55 month EMA.

Yen crosses are generally following treasury yields higher today. While USD/JPY is extending recent up trend and is set to take on 110 handle, some attention would also be on commodity Yen crosses.

AUD/JPY’s corrective pull back from 85.43 should have completed at 82.27 already, with strong break of 4 hour 55 EMA. Retest of 85.34 could be seen as the current rebound extends. But we’d be cautious on strong resistance from there to limit upside, at the first attempt. Price actions from 85.43 could be a near term corrective pattern with at least one more down leg. But even in that case, strong support should be seen from 38.2% retracement of 73.13 to 85.43 at 80.73 to contain downside. Sustained break of 85.43 would resume whole up trend form 59.89.