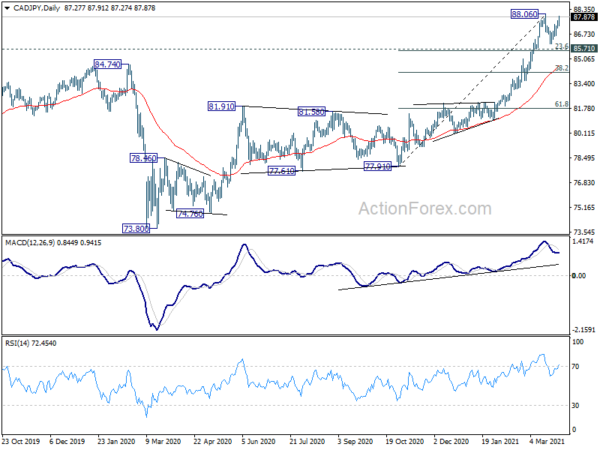 Yen remains generally weak in early US session today. But buying focuses against the Japanese currency has somewhat turned from Dollar to Sterling and Canadian. Both the Pound and Loonie were lifted slightly be better than expected GDP data. On the other hand, Dollar’s rally is losing some momentum. Traders are turning their attention to US President Joe Biden’s infrastructure plan, estimated at the scale of USD 3-4 trillion.

“We saw marked improvement in March’s labor market data, reporting the strongest gain since September 2020,” said Nela Richardson, chief economist, ADP. “Job growth in the service sector significantly outpaced its recent monthly average, led with notable increase by the leisure and hospitality industry. This sector has the most opportunity to improve as the economy continues to gradually reopen and the vaccine is made more widely available. We are continuing to keep a close watch on the hardest hit sectors but the groundwork is being laid for a further boost in the monthly pace of hiring in the months ahead.”

Canada GDP grew 0.7% mom in January, above expectation of 0.5% mom. That’s the ninth consecutive monthly increase. Yet, total economic activity remained about -3% below February 2020 level, before the pandemic. Good-producing industries were up 1.5% mom while services-producing industries were up 0.4% mom. 20 industrial sectors were nearly evenly split between expansions and contractions.

Preliminary information suggests an approximate 0.5% increase in real GDP for February. Retail trade, construction, and real estate and rental and leasing all contributed to the growth, while manufacturing offset some of the increase.

ECB Lagarde: We have exceptional circumstances to deal with at the moment

“Given the exceptional situation that we are facing we are using maximum flexibility” with the EUR 1.85T PEPP purchases program, she added. The March 2022 deadline of the program was not “set in stone”, and policy makers will give “sufficient early notice to avoid the anxiety, the tantrum, or any of those movements” that have happened in the past.

Overall, Lagarde said, “we have an economic situation overall which in this part of the world, Europe, is really marked by uncertainty. What monetary policy has to do and what the ECB has to do is to provide as much certainty as possible.”

France CPI accelerated to 1.1% yoy in March, up from February’s 0.6% yoy. This increase in inflation should result from the acceleration in the service prices and from a marked rebound of those of the energy.

Consumer spending was flat in February, below expectation of 1.3% mom rise. The increase in manufactured goods purchases (+3.4%) was offset by a drop in energy expenditure (-3.1%) and food consumption (-2.2%).

Also released, current account deficit widened to GBP -26.3B in Q4, versus expectation of GBP -34.8B.

Japan industrial production dropped -2.1% mom in February, worse than expectation of -1.3% mom. In addition to pandemic restrictions, production was disrupted by the 7.3-earthquake off the coast of eastern Japan on February 13.

Manufacturers surveyed by the Ministry of Economy, Trade and Industry expected output to drop another -1.9% mom in March, followed by 9.3% mom rebound in April. But the actual figure could be worse as the impact of the March 19 fire at a Renesas Electronics chip-making plant was not reflected in the forecasts yet.