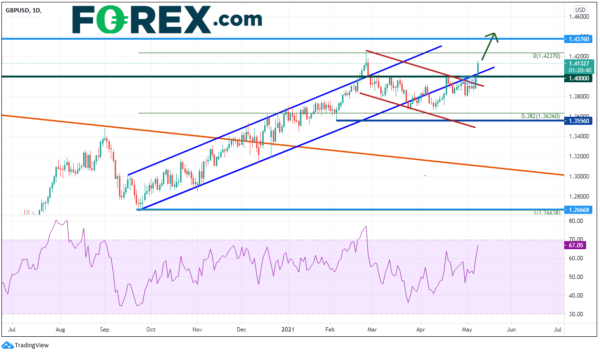 The UK lowered the Alert Level for the coronavirus to Level 3 from Level 4. This means that “the epidemic is in general circulation”. The level 4 alert included “transmission is higher or rising exponentially”. Now that the level dropped, PM Johnson has the green light to ease more restrictions (set for next week), such as allowing restaurants to serve indoors.

The is all good news for the Great British Pound. Reopening’s and tapering! What’s not to like?

After moving higher from mid-September 2020 to February of this year, GBP/USD corrected in a slight descending wedge, which couldn’t even reach the 38.2% Fibonacci retracement level from the September 23rd low to the February 24th highs. On Friday, GBP/USD broke above the top downward sloping trendline of the correction channel. Earlier, the pair broke above both the 1.40000 psychological round number resistance level and the bottom upward sloping trendline of the longer-term channel at 1.4000. The next level of resistance is at the February 24th high near 1.4218, followed by horizontal resistance at 1.4376, dating back to April 2018.

GBP/JPY has been moving higher since March 2020. During March and April of this year, the pair appeared ready to reverse with a head and shoulder pattern. However, the pattern failed to play out as price couldn’t break the neckline. Price moved higher today and took out the highs of April 6th at 153.42. Resistance above is at the 127.2% Fibonacci extension and the 161.8% Fibonacci extension from the April 6th highs to the April 23rd lows at 154.60 and 156.11 respectively. Above there is horizontal resistance at 156.61 dating back to January 2018.

GBP pairs are rising nicely after last week’s BOE meeting and the reopening’s planned for next week. The risk is that Bailey says something dovish this week or there is negative news regarding the coronavirus. Watch for headlines!