April’s inflation surge wasn’t as drastic as it looked, but the real test is still ahead 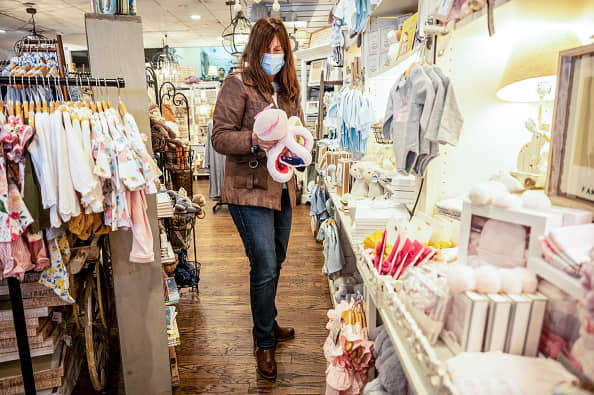 A woman wears a face mask while shopping for a baby shower gift during the Covid-19 pandemic, at Madison’s Niche boutique in Huntington, New York on April 21, 2021.

There is probably less than meets the eye from the startling inflation pop in April, as goods impacted by a variety of temporary influences pushed core price increases at the quickest pace since the Reagan presidency.

Headline inflation rose by 4.2% from a year ago, while core prices excluding the volatile food and energy sectors got their biggest one-month bump of 0.9% going back to 1981.

At the root of the increases were issues related to the pandemic, both in terms of how aggressive the current recovery is and how bad things were a year ago.

There were factors such as supply chain congestion that added to the pressures. At the same time, an aggressively recovering economy pushed prices for airline tickets (up 10.2% in April), hotels (8.8% higher) and used car prices (up 10%).

While that was happening, the things that drive inflation over longer periods, like housing costs and the price of services, showed increases consistent with where they’ve been over time. Shelter costs broadly increased 0.4% in April while services excluding energy rose 0.5%.

In all, the narrative that the burst in inflation that so many had been forecasting will be transitory likely holds up – at least for now.

“The more persistent categories of inflation (services, and rent specifically) were relatively tame last month, but goods prices surged, as did transportation and travel,” wrote Eric Winograd, senior economist at AllianceBernstein. “None of those moves are likely to be persistent. Over time, that means that the most likely course of events is still for inflation to settle down as the supply side of the economy catches up to the demand side.”

Still, the numbers were jarring.

For headline inflation, it was the fastest year-over-year gain since September 2008, just before the economy fell off a cliff due to the financial crisis. And the Consumer Price Index numbers came the same day AAA reported that gasoline prices eclipsed $3 a gallon nationally for the first time in about seven years.

Federal Reserve officials have repeatedly assured the public that the coming inflation push is largely a result of temporary factors plus distorted comparisons to the economic shutdown of a year ago.

Economists on balance have been inclined to side with the Fed, but the latest CPI numbers were considerably higher than Wall Street had expected and served, if nothing else, as a reminder of how unpredictable things are now.

“The Fed will likely continue to be dismissive of strength led by transitory price increases, but data over the coming months will be important for gauging the persistence of strong price increases,” Citigroup economist Veronica Clark said in a note. “However, as April data releases so far have highlighted, there is substantial uncertainty around the path of inflation, and all economic data, in coming months.”

The market has had several notable surprises lately, with Friday’s nonfarm payrolls shocker serving as an even bigger shocker than the CPI numbers. That makes this Friday’s retail sales figures an even bigger deal, particularly with the inflation pict