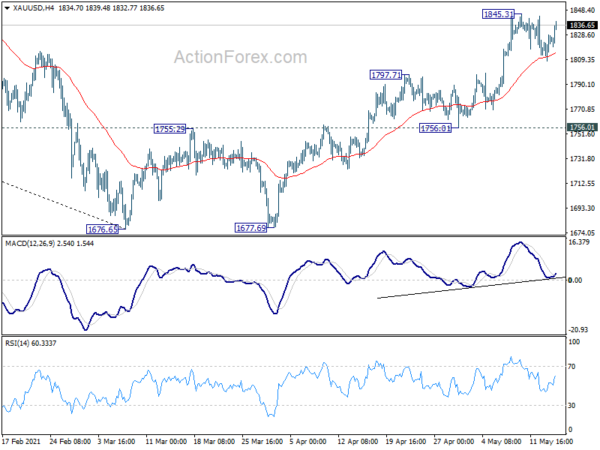 Dollar is under selling pressure against after rather poor retail sales data. US futures also pare back some earlier gains and look vulnerable. Yen is currently following the greenback as the second weakest, while commodity currencies are the strongest, together with Euro. The question now is, whether Dollar’s decline could gather enough momentum for new lows before weekly close.

Technically, focuses will now be on 1.2181 temporary top in EUR/USD and 0.8984 temporary low in USD/CHF. Additionally, Gold’s retreat could have completed after drawing support from 4 hour 55 EMA. Eyes are back on 1845.31 resistance and break will resume larger rebound from 1676.65.

ECB: Future pace of PEPP purchases data-dependent, and based on assessment of financing conditions and inflation outlook

In the accounts of April 21-22 meeting, ECB said that risk-free interest rates and sovereign bond yields had “largely moved sideways” since March and “decoupled from developments in US markets” since late February. Broader lending conditions have “remained favorable”.

“This was widely seen as validating the Governing Council’s March decision to significantly increase the pace of net asset purchases under the PEPP, effectively insulating euro area financing conditions from global spillovers and preventing a premature tightening,” the accounts added.

GBP/USD recovers today but stays below 1.4165 resistance. Intraday bias remains neutral first. But further rise is expected with 1.4008 resistance turned support intact. On the upside, break of 1.4165 will resume the rally from 1.3668 to retest 1.4240 high. Firm break there will resume larger up trend from 1.1409 low for 1.4376 long term resistance next. However, firm break of 1.4008 will delay the bullish case and extend the corrective pattern from 1.4240 with another falling leg.