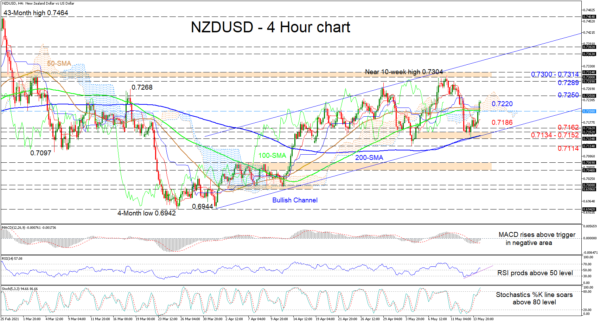 NZDUSD is in the process of recapturing the ground above the Ichimoku cloud after recently bouncing off the 200-period simple moving average (SMA) around 0.7134. The flattening demeanour of the 50- and 100-period SMAs is reflecting the recent dwindling in sentiment, while the advancing 200-period SMA is endorsing the bullish channel.

The upturn in the red Tenkan-sen line is suggesting the positive impetus is growing. The short-term oscillators are also favouring the upside, signalling strengthening momentum. The MACD, in the negative zone, is rising above its red trigger line and is heading towards the zero mark, while the RSI is creeping higher in the bullish territory. The positively charged stochastic oscillator is endorsing the price’s bullish tendencies.

If buying interests persists and keeps the price upward of the Ichimoku cloud, early resistance could emanate from the 0.7250 barrier. Successfully navigating past that, buyers may then aim for the 0.7289 high and the critical resistance zone of 0.7300-0.7314. This is a vital border, which will need to be surpassed for the upper frontier of the bullish channel to come into focus.

If a negative scenario should unfold, initial support could exist from the blue Kijun-sen line at 0.7220 until the cloud’s lower surface at 0.7208. Sinking beneath the cloud, the price may encounter downside friction at the red Tenkan-sen line, currently at 0.7186 before meeting the low of 0.7162. If bearish pressures intensify, the lower band of the bullish channel and the support zone existing between 0.7152 and 0.7134 could play a key part into whether the bullish channel endures.

Summarizing, NZDUSD is adhering to the broader ascent within the bullish channel. That said a dive in the price below the 0.7134 boundary and the 0.7114 trough could reinforce the negative trajectory.