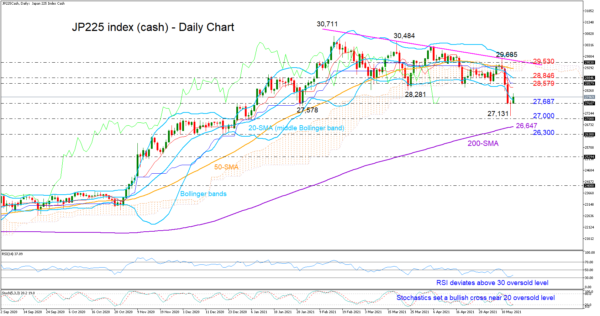 Japan’s 225 stock index (cash) faced another volatile session on Thursday, with the price diving to a four-month low of 27,131 before bouncing up to close near its opening level. The market action took the form of a doji candle at the end of the day and was charted clearly below the lower Bollinger band and around the 27,687 support area, signaling a potential upside reversal.

The RSI and the fast Stochastics are further increasing the case for an upturn as the former is distancing itself from its 30 oversold level and the latter is settling a bullish cross around its 20 oversold mark.

If the bulls take over, the first obstacle could emerge near 28,579, where the restrictive blue Kijun-sen line is also flattening. A step higher from here may immediately stall around the middle Bollinger band (20-day simple moving average), a clear break of which is needed for an advance towards the short-term resistance trendline seen around 29,530.

However, whether the index can resume its previous bullish trend, that remains to be seen as the 20-day SMA is sliding below the 50-day SMA, while the price itself has created a new lower low below the Ichimoku cloud.

In the negative scenario, a close below 27,630 may initially take a breather around the 27,000 level before stretching towards the 200-day SMA at 26,647. Slightly lower, the former support region of 26,300 could provide another opportunity for a rebound.

Summarizing, the JP 225 index is expected to recover some of its recent losses in the near term. Yet, any upside corrections may not be strong enough to reverse the short-term downward pattern.