Week Ahead: Inflation or Stagflation? The UK Reopens and the US Takes it All Off 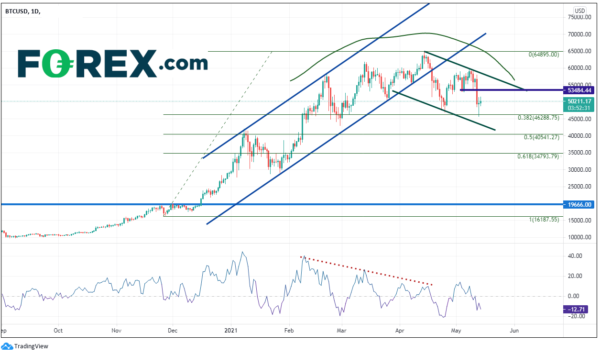 US inflation data has been coming in higher than expected. Will it be the same in other parts of the world?

Last week, inflation data came in hot for April in the US.  However, since the beginning of the month, manufacturing and jobs data were weaker than expected. Is the inflation truly transitory, as the Fed says, or stagflation coming our way?  This week, we’ll get a better view as more inflation data is released from around the world.  In addition, as mentioned in the last Week Ahead, while some countries continue to battle with the coronavirus and a shortage of vaccines, others are in the middle of their re-openings.  On Monday, the UK continues with their re-opening, while the CDC in the US said masks are no longer necessary for fully vaccinated people.  And although earnings season is coming to an end, we’ll get earnings from big retailers in the US this week!

We are halfway through May, and US inflation data for April has been stronger than expected. On Wednesday, the headline April  CPI (MoM) was 0.8% vs 0.2% expected.  The core CPI (MoM) was 0.9% vs 0.3% expected.  On Thursday US PPI (MoM) was 0.6% vs 0.3% expected and the Core PPI (MoM) was 0.7% vs 0.4% expected.  The Fed has indicated that the short-term inflation readings are transitory, meaning that with the US strong re-opening, prices will rise in the short-term, but fall back to “normal” levels in the long-term.  However, some Fed officials who have spoken since the CPI release have been backtracking a bit, such as the Fed’s Clarida, who noted he was surprised by the reading (though he still sees inflation as temporary).  Also, Fed’s Kaplan, who is more on the hawkish, said that he’s worried about how supply/demand imbalances could feed to higher inflation.  Yields initially moved higher on the CPI release, however, have pulled back over the last two days.  The same can be said for the US Dollar. The Fed is paying attention to the stronger inflation data.

Thus far thru May we have seen April Manufacturing data, Non-Farm Payrolls, and Retail Sales data all come in weaker than expected.  The data was expected to be lower than March’s spectacular readings, however, the results were also weaker than the average estimate of economists on Wall Street. Not even they predicted  manufacturing, employment, and retail sales to be this weak.

Strong Inflation along with weak manufacturing, jobs, and spending, is not good.  When an economy is faced with higher inflation, higher unemployment, and lower economic growth, it is in a period of stagflation.

Is the US, and possibly the world economy, in a stagflation environment?  Its too soon to tell, however this week will give us a better picture as a host of data is released.  The UK releases their Claimant Count, CPI, and Retail Sales for April. The EU also releases CPI.  China releases Industrial Production, Retail Sales, and the Unemployment Rate for April.  Australia also releases their Employment Change for April.  At the end of the week, we will get to see if global manufacturing and services have picked up for  May, as the Markit PMIs Flash are released.  Other important data releases are as follows: