GBPJPY is marking its fourth consecutive week in the green zone, though it is set to close with minimal gains as the resistance area around the 154.80 level has been a struggle this week.

The sideways move in the RSI, the slowdown in the MACD, and the negative slope in the Stochastics reflect some uncertainty in the market. Still, should the red Tenkan-sen line around 153.97 hold firm, a bounce above the 39-month high of 154.81 and towards the topline of the bullish channel seen around 156.00 is possible. Not far above, the 2018 peak of 156.59 could be the threshold between a bullish and neutral outlook in the very long-term picture and potentially the key for an extension towards the 160.00 mark.

Otherwise, failure to reach the channel’s upper surface could initially see the test of the 20-day simple moving average (SMA) around the 152.50 number ahead of the lower trendline at 151.53, where the 50-day SMA and the Ichimoku cloud reside. A clear violation at this point could seek support within the 149.35 – 148.51 zone and near the cloud’s lower boundary. Subsequently, a drop below 147.55 restrictive region could undermine the upward trend in the big picture, likely triggering a new bearish wave towards the former resistance of 145.00.

Summarizing, GBPJPY is looking cautiously bullish in the short-term window as the bulls eye heavy obstacles ahead. A decisive close above 156.59 could encourage fresh buying, while a break below 151.53 may reduce confidence in the market. 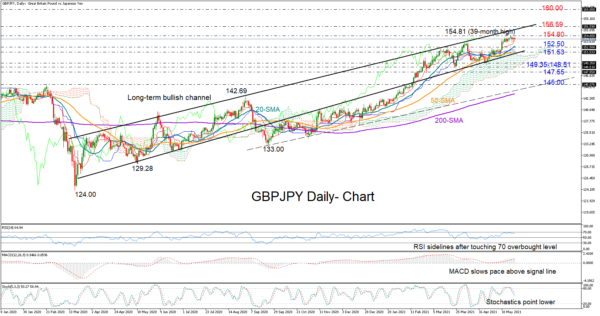